You are here: Home / The Head & The Heart / Begin With the End in Mind 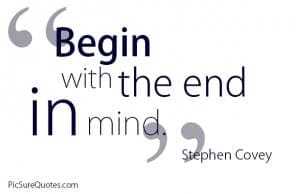 I’m preparing to take comprehensive exams for my PhD work on Saturday, and my mind is crammed with what most would consider utterly useless information about leadership.  As we begin the school year at Grace, a maxim from Stephen Covey keeps rolling around in my head: begin with the end in mind.  The meaning is probably obvious to most of you, but it means that, as you embark on something, think about where you want to end up. One eye clearly fixed on the destination will guide the decisions you make along the journey.

My mind goes back to this idea as I think about my graduating senior, and about you as you walk your child to class or drop them off at school this week. It seems like only one Olympic commercial break ago I was watching Donna Youngblood walk her out of testing for admission into Jr Kindergarten, what we then called “K4.” She was wearing a little blue knit dress, yellow on the bottom, with white stripes, white bow in her long brown hair, hair that absolutely would NOT grow until she was three, and then came in with a vengeance. I see it in my mind’s eye so vividly. Donna told me that my girl had proudly walked into her and announced, with transposed letters that were common to her not-quite-yet developed speech, “when I grow up I’m going to be a cheerleader for the Dace Tougars!”

Gotta hand it to her: the kid’s got goals. Flash forward 14 years.  As I steel my heart for her final season cheering for those “Tougars,” preparing to watch her walk across my stage and out my door, I am grateful: for this school, this community, these people who have loved and supported her so well. For those of you just beginning this journey, or at some point along the way, let me encourage you- stay the course. God will rain blessings on your head. But, as you begin, begin with the end in mind.

Ashley and I won’t be winning any “parent of the year” awards, but there are a few things that were vital touchpoints to getting us where we are now.  Here they are: nothing magic. Pray over them, then take them or leave them.

Invest deeply in their lives, but don’t worship them. There is a difference between helping your kids know you love them and are deeply for them, and drawing your meaning and worth from how they turn out. I write about this a lot, because it’s so dangerous. Your kids can become your idols, just like money, sex, or anything else, if they are the source of your identity, your value and your worth. If they’re not your idols, if you get all those really important things from Jesus instead, like you were created to do, it will free you up to just love and invest in them. You can do some really important things, like: having dinner together (“all screens off”) at least a couple of times a week together, but not feel guilty if it’s not every night; go to as many of their games and events whenever you can, but not be psycho about attending each one-they need to know that other people, other ministry, your work is important, too, and that they are precious to you, but not the center of the universe; coaching them through difficult times, but only protecting them from things that are actually dangerous to them, prayerfully discerning which are harmful and which God is using to make them strong, resilient, powerful prayer warriors who seek after Him in a culture that won’t always be friendly to Christians;  and, realizing that time together doesn’t involve scheduling every second on the weekend or after school around some activity for them, instead throwing them in the car with you as you go to Home Depot, visit the sick member of your church, or give the house a good spring cleaning. They will learn more by watching you live as a dedicated disciple of Jesus Christ than they will by you watching them all the time, every weekend.

Surround them with other adults who love Jesus. Christian Smith, Director of the Center for the Study of Religion and Society at Notre Dame, says that one of the key components of raising kids who maintain a thriving faith witness is putting them in the path of other, non-parental adults who love the Lord, and who model the things you do. I sometimes have people ask me why it’s so important to be a part of a church home if they have a five-day-a-week Christian school community. I believe one of the reasons God commands it for us is that families, especially children, need to be around other adults who are speaking the same things into their lives that we are, whether a teacher, a coach, or a Sunday school teacher or youth pastor. I can’t tell you how many times my kids have come home from church while they were growing up, sharing some spiritual insight they learned while in their student ministry group. Nine times out of ten, it was something we had talked about around the dinner table—MORE THAN ONCE! But, when it came from a guy with less grey hair, and whose shoes are way cooler than mine, it clicked. They need those other adults.

Read the Word, model it for them, and pray. You knew I was going here. Our “family devotionals” are always on the go. They consist of Ashley or me taking something that is happening to the girls at that moment, and speaking God’s Word and His Truth into it. That’s it. That’s the devotional. We stink at sitting around in a circle with the book open. We’ve never been good at it. But, we read the Word every day, so we have it on our hearts to give when those moments come. We try to live it out in how we treat each other and the people around us, and when we screw it up royally (which is often and epic), we ask our kids for forgiveness, so they can see we are not perfect, but we’re perfect-able.  Finally, we pray. Pray with them and for them, a lot more than we used to, because we’ve realized it’s the most important thing we do, and, if it’s not all that matters, it’s close.

Before I take my exam and forget all my good leadership quotes, I’ll finish with one from Max DePree, a great CEO and a Christian, that I think captures being a parent who begins with the end in mind (I’ll substitute “leader” for “parent” here): The first responsibility of a parent is to define reality. The last is to say “thank you.” In between, the parent is a servant and a debtor. I pray your reality, and your kids’, will be rooted in Christ, and that you will live and serve as one forever in His debt. Go Tougars!