You are here: Home / Grace Community School / On the Right Flight 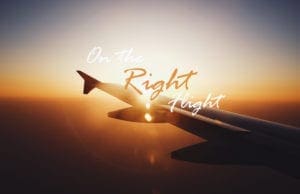 I flew to New York City for a conference last week. As I left DFW, I was reflecting on navigational vectors, and what a curious thing they are. I’m not certain of the navigational vectors coming out of DFW, but I read somewhere that if you were flying out of LA to New York, and the pilot adjusted the heading just 3.5 degrees south, you would land in Washington DC, instead.  A change like that would be barely noticeable at takeoff. The passengers would hardly feel it- the nose of the plane would move just a few feet. But, when magnified across the landmass of the U.S., you would end up 225 miles apart, and in a very different place.

Years ago, when we first started building Grace Community School, we set out to think about how our faith transforms how we think and feel about what and how we teach, and how we lead our school and build culture and community within and around it. We were aided by 2,000 years of Christian thought on the matter, so we weren’t exactly recreating the wheel.

At Grace, we set out to be truly Christian and transformational, to change the way kids think and feel about life, and to lead them to live in a very counter-cultural way, ultimately committed to ideas like humility, and grace, and the pursuit of truth and love. We set out to help them view their whole lives, whether work, ministry, or family, as one complete and whole thing, rather than several separate dis-integrated things. Therefore,  Christian education, like at Grace, has to embrace a foundation and philosophy that is uniquely Christian, rooted in a vision of the world and creation as revealed in the Bible. These philosophies are radically different to those ends and philosophies inherent in other forms of education, whether public or other private schools that aren’t inherently Christian in focus. Here are just a few of those ideas:

In the Christian way of thinking, as in other religions, angelic and demonic beings are part of the fabric of reality, impacting and influencing life on earth and the interactions of human beings.  God, of course, is the ultimate being within this supernatural realm, the creator of all that is. God is not deistic, setting the world and the cosmos in motion and then retreating; He is sovereign and actively involved in the affairs of humans, nature, and creation.

This perspective of God has implications on the Christian mind as it considers identity, truth, nature, and the universe. Rather than a largely secular, naturalistic view of identity as self-referenced– that I am who I say I am– in the Christian mind, humans are largely externally-referenced beings, created in their Creator’s image and defined, to large extent, by the nature and character of God- I am who God created me to be, both in my sense of self and in my relationship to others (even though that image is distorted by sin). Truth is also rooted in the nature and character of God, who is unchanging. Truth, in the Christian mindset, is perceived more as absolute and fixed (though continuously revealed to man), rather than relative.

Given the Christian perspective that God is a sovereign God, who has the freedom to act and does act upon his creation at his election and will, Christians perceive creation as an open system. It is not, as the famous metaphor indicates, a watch. Or, if it is, it is a watch with the back removed, the watchmaker constantly turning dials and gears.  A naturalistic perspective, necessarily embraced in a non-Christian school context, is that of nature as a closed system, self-contained, confined within the system itself. The box has no lid, and there is nothing outside the box. These conflicting perspectives of being, identity, truth, and nature have implications in how we grasp meaning, conceive of time, and they affect many other areas of inquiry. All of these perspectives equate to distinctively-different ways of viewing a Christian school’s entire curriculum and instruction; not just science, but politics, language, history, and every field of human inquiry.

Beliefs also influence action, and to think Christianly impacts not only curriculum and instruction, but it also dramatically affects how Christian schools view school leadership, governance, professional development, community dynamics, school approaches to student discipline, personnel policies and preparation, and everything that makes up the ecology of a school community.

The point is that Christian education is not just a public school or another private school with a Bible study or chapel. It is a completely different animal.  Other types of schooling are no more like Christian education because they both teach English or math than a Subaru and the Space Shuttle are substantially similar vehicles because both have tires and windows. To believe that I can aim for one and achieve the other would be like that pilot changing his direction just 3.5 degrees coming out of LA, just a few feet of the nose, and finding myself at Reagan National, rather than LaGuardia, only to be met by the friendly American agent who encourages me not to worry, that I’m now in a substantially similar city with buildings and streets just like New York, and I flew over similar roads and towns to get here, so, after all, it’s all just kind of the same thing.

New York and Washington DC are both great American cities. One can’t possibly be confused with the other, and they can’t be substantially similar without stripping either of that which gives it an identity.  Our country is richer for having both of them; but, I don’t want to go to one when I plan to come to the other. If my intent is to teach kids to think Christianly through the vehicle of the school they attend, I have to start with the philosophy that underlies it. I have to make sure I’m aimed in the right direction, that I’m on the right flight.