You are here: Home / Christian Education / The Undershepherd 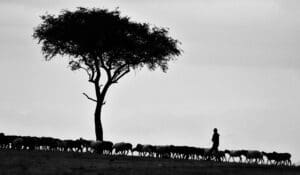 There are a lot of things that bother me about our culture, many of which I’ve written about here. That should not surprise any of us, because we live in a Genesis 3 world, one that stands opposed to the God we serve. One of the things that I find most offensive is the way men, and particularly fathers, are portrayed in modern media. Dads are almost always represented in one of several ways. There’s the abuser, the one who appears charming at first, but then harms and hurts those around him. Then there’s the idiot, the perhaps kind but innocuous dolt, the butt of every joke in the sitcom. Finally, there’s the passive guy, the empty set, the oxygen thief who plays no real role whatsoever in his family’s lives except maybe, if they’re lucky, bringing home a paycheck.

It’s no wonder these roles get played out in real life, even in the church, because these are our role models. There don’t seem to be many great archetypes to live by. But Jesus gives us one, and I was reflecting on it as I was meditating in Scripture the other day. In John 10, Jesus is talking to the people in the presence of the Pharisees, and he describes himself using an unusual metaphor.

Very truly, I tell you, I am the gate for the sheep. All who have come before me are thieves and robbers, but the sheep have not listened to them. I am the gate; whoever enters through me will be saved. They will come in and go out, and find pasture. The thief comes only to steal and kill and destroy; I have come that they may have life, and have it to the full. (John 10:7-10)

This is one of those agricultural metaphors Jesus used that was rich for the people of his day, but that we need a little context to fully appreciate. It’s easy for us to think of shepherds in the Hallmark store variety: the cherubic little figures cuddling cute little sheep, mainly little boys who would probably be just as likely to be eaten by wolves or lions as the sheep themselves.

In what was a great privilege in my young adult life, I had the opportunity to spend time among the Massai in Kenya, on the beautiful Massai Mara plains. The Massai are amazing nomadic, shepherding people of the land, and live in ways that would have been common in the first century.  There’s nothing wimpy about these shepherds; they are also warriors. The Massai measure wealth by livestock; other than their families, their cattle and goats are most precious to them. They allow their animals to roam free by day, grazing, always under their watchful eye, always watching for predators, which on the Mara means mostly prides of lions.

At night, the Massai herd the animals into large circular pens made of thatched acacia wood. The pens don’t have a metal or thatched gate, because the shepherds are the gate. The shepherds lie at the pen opening, protecting their livestock with their lives. If an animal tries to leave, it has to get past the shepherd. If a predator wants to get at the livestock, it has to get through the shepherd. And, these shepherds are tough. They have a club with a knob on the end of it and a spear, and together they will kill anything that threatens what they love.

Jesus very pointedly helps the people understand that he is the way of life, that the only way in and out of the pen into the fields, life everlasting, is through him. Jesus offers protection from the enemy and his minions (very pointedly speaking about the Pharisees), those who would try to control the people with words and ideas contrary to the Words of Life. Contrary to the enslavement that comes from falling prey to the enemy’s ideas about the world and how it works, Jesus offers full and abundant life.

Whether you’re a dad, or a leader in your business or church, Jesus is calling you to be his undershepherd, to be in charge of that family, those people you work with, or that congregation. You are their protector until he comes again. He’s given you everything you need to do that, if you’ll take it. Are you ready?

I know so many guys who have at least one gun in their car or house, and are ready to physically protect their families from an intruder. That’s good, but are you just as ready, or more ready, to protect them from the much more probable attacks of the enemy on their minds, their hearts, and their identity?  Are you the shepherd, watching over them watchfully as they work and play in the fields during the day? Are you standing at the gate at night, giving them what they need when they’re home? Are you speaking truth and words of life into their hearts as they ride in your car and sit around your dinner table?

Being a protector, and undershepherd requires us to fortify ourselves with God’s Word. The greatest battles your loved ones will face are the wars for their hearts and minds, the wars of heart-shaping ideas and mindsets, and that’s where our protection and provision is most needed and felt.  Being a prepared protector requires us to be in the Word daily, to be a hearer and a doer, to know it so well that it becomes a way of life for us. It’s far better to be able to speak God’s truth into the situations your children, spouse, and coworkers face, to fortify and encourage them, because it’s on your heart and is a part of you then to have to go look it up, give them a book, or refer them to someone else. I’m not talking about quoting chapter and verse. If you can do it, great. I’m talking about making God’s truth such a part of your life that it becomes how you speak and how you live.

Being ready also requires spending time with the Lord, silent and still before him, in his presence, not just studying his Word but meditating on it. Meditation isn’t some weird, Eastern sense of getting in touch with your inner being through your navel. It’s not about emptying your heart and mind, but about filling it with the presence of the Holy Spirit and letting God’s Word actually transform you. Every great action movie has the “training sequence,” the minute or so, representing a long period of time, when the hero is working alone or with a mentor to hone his or her mind and body from something soft into a weapon that will allow them to take on the enemy. Mediation on God’s Word, silence and solitude with him, letting him mold and shape your heart, is your “training sequence.”

The Holy Spirit gives us wisdom and power to beat back the enemy from our families and friends when we ask for him. Scripture tells us that the enemy prowls around like a lion, seeking to devour our people, but if we resist him, he’ll flee from us. Just like the Massai, chasing the lions back with clubs and spears, the Spirit of God that raised Jesus from the dead is our weapon, and it’s all-powerful and ours for the asking.

So, which one are you? The abuser? The dolt? The passive oxygen thief? Or are you the undershepherd, the warrior, prepared and ready to protect and provide? It is glorious and good to be a true man living in the redeemed image of God in our culture today, a sad place full of emasculated males and bullies who prey on women and children. Our culture needs men like that, needs men and women who are great role models and lead people with pure hearts of sacrifice and service. Don’t a predator, whether active or passive, used by the thief.  Be the shepherd; play the man.