You are here: Home / Christian Education / Time and Time Again 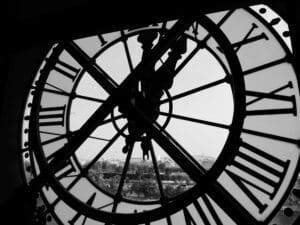 Reflect for a moment on this question: Do you think we are living in the worst time that’s ever been?

Now, let me pose a hypothetical question: I’ve built a time machine. It’s been perfected and I’m offering you the chance to take your family and live in any past place or era, other than this one right now.  Or, you can stay here. When do you choose?

It’s pretty easy to be depressed when plugged into media or observing the culture around us. There’s a pretty strong thematic narrative that we’re living in the worst of all times, and that all things are getting worse.

From a certain, very limited perspective, that may seem real. Do you know that the average age of those who work in media is 41 years old, compared to lawyers (47.5), doctors (53.2), CEOs (54), and university professors (55)? This point here isn’t ageist, but it underscores the very real fact that, all things being equal, your perspective is partially molded and shaped by your sense of time, and your sense of time shaped by your lived experience.  If you’ve lived a shorter time, the times we’re in may be the worst you’ve lived through. But, are they the worst that have ever been? Answering that question accurately requires a broader perspective.

As a human being, made in God’s image, you are everlasting. While you had a beginning, you have no end. You are eternal. If you are a follower of Jesus, a child of God, you have a Father who is Almighty, neither bound by time nor space. He created time and space, and exists outside of them. He is and was in all times and in all places at once, now, and always. That kind of thinking will make your head hurt, if you ponder it for a while. He’s not bound by the time/space continuum, and someday, neither will you be.

This means that, despite the temptation to measure and assess life and reality in terms of minutes, hours, days, and years, being transformed by the renewing of our minds gives us the power to stand back and view time in a completely different way- through the lens of eternity. And, that lens can change everything about how we live, and view the world around us, and act within it.

Viewing history over even the past two hundred years gives a dramatically different picture from the common narrative that we’re living in the worst times ever. In 2018, statistician and public health expert Hans Rosling posthumously published Factfulness: Ten Reasons We’re Wrong About the World–and Why Things Are Better Than You Think. Rosling identified several human instincts (which seems to be distorted thinking as a result of humans’ fall from grace) that he indicates keeps us from actually seeing the world as it is as time advances.

One of these distorted human instincts is an inherent human negativity bias, a tendency to notice bad things, rather than good, over time. It’s the reason news channels focus on stories of bad news, rather than good–it both reflects our bias, and caters to it.

Rosling gives a list of issues that have actually improved, ranging from the past two hundred years, to only over the past few decades. Some may surprise you. Do you know that over time the world has seen decreases in legal slavery, oil spills, expensive solar panels, HIV infections, children dying, battle deaths, people dying due to death penalties, leaded gasoline, plane crash deaths, child labor, deaths from disaster, nuclear arms, smallpox, smoke particles, ozone depletion and hunger? At the same time, the following good things have actually increased over time: protected natural habitats around the world, women’s right to vote worldwide, the knowledge of science, harvests worldwide, literacy, democracy, child cancer survival, girls in and graduating from school, monitored species, electricity coverage, mobile phones, water, internet and immunization. Finally, Rosling notes that in the last 20 years extreme poverty has decreased by half worldwide, while the worldwide life expectancy has increased to 72 years. That’s a pretty impressive list.

This isn’t to say that the world is a great place, or that the New Jerusalem has arrived. Many of these things are still broken and bad; childhood cancer and battlefield deaths still exist, and there’s that other half in extreme poverty. There are also things that are clearly getting worse. We are increasingly a society without friends, and friendlessness in the U.S. and other western nations leads to despair, atomization, and hostility. In perhaps a related phenomenon, deaths due to despair, like suicide, are increasing. In fact, because by God’s grace and over time we’ve developed solutions to some devastating problems, like smallpox, we’re now faced with more complex problems with difficult solutions, like global climate change. It is not yet time for the Church to pack up our toys and head home.

What it does mean, however, is that as Christians we have to look at time itself, and the times we live in through a much deeper, broader lens than the strident, urgent cries of the 24-hour news cycle. We have been given a great gift, the gift of eternity, and perspective that comes with that gift gives us the ability to avoid falling prey to the fear and anxiety that predictions of imminent doom borne from limited perspective bear. It allows us to step back, pray for the wisdom that God promises, breathe deeply, and consider how we can act as Christ’s Body with a sense of purpose and mission in the world around us.

This perspective of time eternal is particularly profound when raising our children. Next to love, perhaps the greatest gift a parent can give a child is perspective rooted in a deeper, broader understanding of time.  When our kids are young, the weekend seems like a long way off. Whether it’s a failing grade, a blown tryout, a friend issue, or maybe even something as serious as the illness or death of a loved one, these issues, in the moment, are intense and devastating.  Even when the issues are relatively minor in the context of their entire lives, the emotions they invoke are not. They aren’t to be belittled, but as parents we have the opportunity to help contextualize them, to ground them in eternity.

And, eternity isn’t some far off, distant dream, itself a mist and vapor for those with limited perspective. Eternity is now. Henri Nouwen says that “the great mystery of the spiritual life–the life in God–is that we don’t have to wait for something that will happen later.” Eternity is our current reality. It’s God’s Spirit, complete and eternal, living and moving in me. That eternal life active within me empowers me to realize that my external circumstances do matter, as opportunities to love and be loved, to be shaped and molded, conformed and refined into all I’m created to be, while at the same time rendering me a shaping, refining influence on others, all for goodness and glory. And yet, in other real sense, my immediate circumstances don’t matter quite so much as they seem in the moment, because they are framed within an everlasting story of what God is doing in and through me, and through His people as He moves through time and space to fulfill His purposes.

Kids aren’t always open to these messages; our negativity bias sometimes draws us down to the mosh pit of discouragement, which seems to have a strange, familiar comfort of its own. We’re resistant to getting up on the balcony where we can see the whole dance floor, much-needed perspective we as parents have the vision to bring them. I’ve endured plenty of rolled eyes, checked out brains, and, over the past several years, phones hung up in my ear as I try to bring these truths to my children. Yet, prophets endure misunderstanding and rejection, and it’s a kind of prophetic role we play in our kids’ lives, speaking this truth of lived experience earned by time and Spirit-given conceptions of eternality into sometimes unwilling ears. Persistence pays off, because we’re the only ones who can help them see today through the lens of tomorrow, and it will ultimately change their everything.