You are here: Home / Parenting / Befriending the Darkness 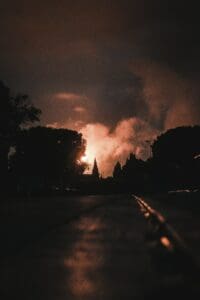 Perhaps the greatest transformation in life is changing our perspectives toward death.

My father has cancer, and the treatment over the years has begun to take his memory from him.  We are in a season of long goodbye. His condition has me thinking more and more about mortality, both his and mine. There are few things most of us fear more than death; it’s primal. In the Garden of Eden, Satan convinced Adam and Eve that God was a liar, and that God couldn’t be believed: “surely, you will not die!” the serpent said, “God doesn’t want you to eat the fruit, because He knows if you do, you’ll be like Him, knowing good and evil.”  In that moment, the serpent convinced us not to fear death. And, every moment after that, he has convinced us to be terrified of it.

No matter what we think about the moment of death, it’s the actual process of dying that we fear most-being talked about in hushed tones behind our backs by concerned voices, unconvincingly-masked frightened faces of our loved ones as they slowly detach from us, the pain of disease or equally-painful treatments that will ultimately prove fruitless, or being alone.

And, even if we somehow don’t fear death for ourselves, we often fear it for those we love. I was talking to a friend the other night whose father died young. He said he lost his fear of death the moment his father died, only to pick it up again the day his children were born.

We have built a culture around avoiding aging and death. Industries are founded upon this fear. The idea of losing our vitality, of “slipping,” of “missing a step,” fills us with such dread that we’ll spend exorbitant amounts of time, energy, money, and Botox to escape it. We’re conditioned to love what is young and beautiful, and conditioned to hold onto it, even as we know it’s an exercise in futility.

None of us objectively disagree that pain, suffering, and death are a part of life, but almost all of us try to deny and suppress that which is painful in life. Have you ever thought how much your anxiety comes from trying to escape, control, avoid, or suppress those things that are inevitable, in some attempt to meet common conceptions of what it means to be beautiful, vital, healthy, and alive?

What if it could be different? What if the great Christian priest and writer, Henri Nouwen, was correct when he said, “I have a deep sense, hard to articulate, that if we could really befriend death we would be free people.” How powerful would we be in the Lord, and what could stop us, if we no longer feared death, our own or those we loved? Even though it could still slow us down a bit, what if it completely lost its staying power over us?

They truth is that we’re eternal beings, and when Jesus spoke of His own death, passing to eternal life, He called it “being lifted up,” meaning achieving something more, becoming something greater. I wouldn’t say the preteen years were the best of my life, whether my kids’ or my own. And yet, these gawky, awkward, angsty years of becoming something more and beautiful were somehow mysteriously lovely in their own way, the gateway to something more. But, isn’t the process of aging and dying is also an awkward, ungainly transition to becoming someone and something magnificent, something that, as C.S. Lewis famously said, we would be tempted to worship were it to appear before us in all its glory?

I think Nouwen had the heart of Jesus and of Paul, a true eternal perspective, when he said, “In order to become full human beings, we have to claim the totality of our experience; we have to come to maturity by not only integrating the bright side, but the dark side, into our selfhood.” But, we can’t integrate and embrace things like aging, and achiness, losing a step, and even aloneness (which isn’t really aloneness, but an opportunity to realize Christ as our sufficiency) unless we’re willing to surrender.

We should be wise stewards of the bodies God has given us, and we should seek healing whenever we are ill. Both are biblical callings on our lives, and being obsessively attracted to mortality and death in Jesus’ name is unhealthy. But, so is being so very obsessively repelled by mortality and death that we spend our lives dreading them, anxiously and vainly trying to escape them. Surrendering and befriending the dark captures the spirit of Paul in his letter to the Philippians, “to live is Christ, to die is gain.” Paul truly lived surrendered to God, truly indifferent to what God would do, and at peace with what He would do.

What if we lived similarly surrendered lives? What if our lives acknowledged that God is truly God, and it was okay for Him to do His loving, glorifying work in us, no matter what that was?  Lives like that could realize and acknowledge that the aches and pains of aging are just as much a welcome part of living in this broken world as energy and youth and life. They are growing pains, pains of becoming, pains of birth into something more.

The beauty and overwhelming blessing of the cross is that we can find splendor in brokenness, meaning in darkness, realizing that even more wisdom and riches, and, yes, stronger bodies than we have ever known are coming, and, even if our world doesn’t get it and value it, our God does, and He awaits us there.  When Paul said, “death where is your victory, where is your sting?” he didn’t mean we don’t grieve those we love when they pass on, but that death has no power over us to bring anxiety or crippling, life-changing fear, unless we decide to let it.

A great gift to our families is to age well and teach our children and grandchildren the right way to die. The other day, I watched a memorial service where several of our students eulogized their grandpa. I’m sure in that grandpa’s day, he was a young, handsome, with-it guy. Maybe he could throw a baseball a mile; maybe he was a captain of industry. I don’t really know, and who is still alive to care? What filled my heart, and what will resonate with his kids and grandkids in eternity, is what they learned from him in the aging and the dying days of his life.  The unconditional love, the encouragement, the faith and wisdom that time slowing down provides. That’s what they’ll remember, what will survive him and be his legacy, and therefore, all that really matters.

I’m so grateful to my own father that, for whatever bad decisions he’s made in his life along the way, he filled his heart with the joy of Jesus years ago–a joy that, by God’s grace, has given him the ability to endure some pretty hard things, and a joy that is now shining through the growing dimness of his fading mind to make life more of a blessing for his wife, who is heroically caring for him, and all of us who love him.

By not being afraid of death, by befriending it, my father is teaching me how to age and die well for my own kids and grandkids, someday (please, Lord, let it be!).  And, he’s teaching me to live well right here and now. It’s a life and an end he’d never choose–but do we ever get to choose? And, there’s a lesson in surrender there, too.