You are here: Home / Uncategorized / Live Like a Queen 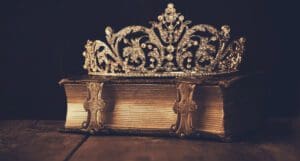 My mother is an Anglophile, which I learned early on means that you love all things English. I really don’t know how this happened; it developed long before I was born. But, she’s the one whose library contains every book ever written on English history, topics so dry and boring that even the authors of those books wouldn’t want to read them. She’s the lady who corrected the tour guides when we were young and traveled to England (you can imagine how well-received that correction was both to the tour guide and her teenaged children).

My mom also loves the British royal family. She’s a subscriber to Majesty magazine, which is a monthly (yes, monthly) magazine that features all things British royal family. One of my young preteen memories was being dragged out of bed at 4 am to watch the wedding of Charles and Diana, the dream of every 13-year-old boy.

And, so, when Queen Elizabeth II passed away last week at age 96, having sat on the British throne for 71 years, longer than any monarch in British history (can you name the second-longest? Queen Victoria, at 63 years, 7 months, and 2 days- thanks, Mom!), my mother’s phone lit up with friends and family around the country, consoling her as if she had just lost Aunt Mabel from Arp. And, while I have not shared my mother’s passion for matters British or royal, for us it was a little like losing a family member, a way of life.

I know we’re not alone. My own girls, and millions of others, have become fans of the queen through the television series dramatically depicting her reign, as well as movies about her and her family. People across the Commonwealth, and even in countries like ours that rebelled and broke away from Britain, now mourn the queen’s passing.

What made this woman so extraordinary, truly the last great lion of the 20th century? I think there are some ways this amazing woman’s life and legacy can inspire us as we lead our own families, churches, and business, right here in Tyler, Texas, good ol’ U.S. of A.

The queen lived out the greatest values of her people. There’s something elemental about we humans, made in the image of God, that we need to be led. Any leadership position has an image-bearing role, and represents what is right, and good, and God-breathed, or what is evil and wrong. With rare exceptions, people will follow where that leader leads.  A monarchy, even one like Britain’s where the head of state and the seat of government are separated, is ancient and symbolic leadership that points people to what that society values.

C.S. Lewis said that “where men are forbidden to honor a king, they honor millionaires, athletes, or film stars instead; even famous prostitutes or gangsters. For spiritual nature, like bodily nature, will be served; deny it food and it will gobble poison.” Lewis’ quote may be a little heavy-handed, but his point is sound: we are drawn to leaders who represent those values we most admire.

Unlike today’s celebrities, the queen understood that, in representing what was best about the British people, she had to elevate those values above her own personality, her own public self-expression.  Andrew Sullivan notes that, when Elizabeth became queen, she “was tasked as a twenty-something with a job that required her to say or do nothing that could be misconstrued, controversial, or even interestingly human—for the rest of her life.”  She represented a nation, rather than herself. The fact that she pulled that off, with grace and without exception, for over 70 years in a narcissistic world was remarkable.

Her impact on her people was profound. British pastor Pete Greig tells a story of a time he spent on a train racing into London. Feeling introverted, Greig popped in a pair of Bluetooth earbuds and began listening to a podcast discussing trauma and a way of measuring it through the pH balance of a patient’s urine, of all things. He turned up the volume, and caught the eye of a fellow passenger. Afraid she wanted to talk, he pointed to his earbuds and mouthed, “sorry.” She shrugged and turned to her book, as other passengers ignored him. Twenty minutes later, he realized to his horror that his earbuds were not working, and that he had blasted the intricacies of urine testing to the entire carriage of passengers, all of whom were pretending not to notice.

That would never happen in America. Greig would have been yelled at, maybe even thumped on the head, right? I read this account the other day, and it struck me: the fact that he wasn’t, that his fellow passengers were too polite, and simply kept a stiff upper lip throughout the entire 20-minute ordeal, was so very English. For better or for worse, extreme politeness and resilience are distinctively-English traits. They know how to do that because those values have been modeled for them by their Queen for 71 years.

Many leaders throughout history model values, and become leaders of movements; the threat comes when they transition from incarnational image bearer, exhibiting the best of a nation or a people, to idol, making themselves the point and the object of the people’s worship. The queen was a woman of deep faith, and instead of becoming an idol, she pointed to her King.

At her coronation in 1953, the 25-year-old queen stated her desire that, “for the years I may, by God’s grace and mercy, be given to reign and serve you as your Queen.”  Two weeks ago, just before her death, the queen wrote to Anglican bishops, “Throughout my life, the message and teachings of Christ have been my guide and in them I find hope.” Jim Denison noted last week that, for her 90th birthday, she participated in the publication of a book called, The Servant Queen and the King She Serves, intended to be a faith-based conversation starter for Christians.

Over the years, the queen and the monarchy have endured criticism that it should no longer exist, and that the queen and her family are only “figureheads.” The implication is that serving as a symbol of what matters most to a people is not immensely valuable. While I like the way we’ve set it up over on this side of the pond, we can never underestimate the power of symbolic, incarnational leadership, whether it’s in our homes our churches, our workplaces, or our other institutions. Throughout Scripture, God used Moses, the prophets, and the kings, broken human beings all, to represent Himself, His nature and His character to the people. Paul tells us to “be imitators of me, as I am of Christ.” 1 Cor. 11:1.  We image God in leading people. That’s why character matters in leadership, all types of leadership. Leadership is holistic; over time, this imaging effect means that the leader’s life either edifies or degrades the quality of the institution or organization he or she leads, and the quality of its people. There is no such thing as leadership having a neutral effect.

Some of this symbolic leadership comes through words, but most comes through action, lived lives. We can talk a good game, say all the right things, quote the correct Scriptures, but if we don’t live out and model what we say we believe, it’s all for naught. When given the choice between what we say and what we do, assuming those are different things, our children and the people who follow us will do what we do. Every time. Aligning our words and our actions is called integrity, and integrity of character is critical for leadership. Christian Smith, a professor of sociology at Notre Dame who has studied youth and the passing down of faith for over 20 years, summarizes much of his research by saying, when it comes to parenting, “we get what we are.” How we live, the values and faith we embody, dictates to a large degree who our children become.

Some of us may have come from painful, dysfunctional backgrounds. We may have endured tremendous suffering throughout our lives. None of us have lived lives that are stories of completely unbroken faithfulness. The reality is that the gospel is about brokenness, and confession, and repentance, and redemption by the cross and blood, and choosing to live life in the light of Jesus and His call on our lives, and not being what we were before, and being transformed day-by-day, and any of us can live those things out loud for our children.

Letting our kids and others we lead see the full gospel lived out completely in our lives in the greatest gift we can give them, and anyone can give it at any time. Even if we start right now, we can live like a queen.