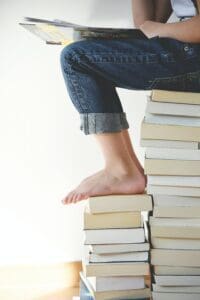 In his Seven Habits of Highly Effective People, one of the most iconic of Stephen Covey’s truisms is begin with the end in mind.  When we embark on a venture, project, or strategic plan, it’s most effective to know where we’re headed, where we want to finish, as we begin. Knowing where we want to end helps us design the course along the way, making the right decisions geared towards a specific target or vision.

This is true for so many things in life, even how our children spend their summers. As the school year draws to a close, and as we begin a blessed summer break, it’s important not to take a break from parenting. The same level of intentionality we bring into the school year needs to be brought into the summer months. And, beginning with the end in mind is a great principle for planning our summers. If, by chance, your end, your plan or hope for your children is that by the end of the summer they’ll not only be more rested, but better equipped mentally, socially, and spiritually for next school year, here are a few intentional summer practices you might consider:

Reading together and separately strengthens relationships among the family. It also develops a rich vocabulary, which leads to greater mastery of language and heightens performance on college entrance exams. In our shortened attention span world, reading actually focuses us and gives us a greater ability to pay attention in school and at work. Reading with our children, and encouraging our children to read themselves, is the single most important way we can participate in furthering their education.

So, go old school on your kids this summer. If you don’t have a library card already, take them downtown to the public library and get one. Then, take them down there every couple of weeks, let them wander around and imagine, and then let them pick out a few books. Take them home and read them aloud, or, if your child is old enough to read to themselves, let them read. Take away the screens for a while and substitute a great book. It will take some getting used to, but they’ll catch on quickly.

Two of my children were natural readers, and one definitely was not. And yet, once she saw the rest of us modeling reading, she began herself. She is now probably my most voracious reader. It’s a learned passion, like so many others, and it’s guaranteed to make you smarter.  Model it, and encourage it.

Haidt, a sociologist, observes that unsupervised free play is the key to teaching children important social skills, including the ability to cooperate, make and enforce rules, compromise, adjudicate conflicts and accept defeat. Think about when you were a kid (I hope you had these opportunities): playing kickball in the street or some game you imagined and invented with a stick or a rock with some of the other kids during the summer taught you to invent and negotiate rules, resolve conflicts arising from those rules, be a good winner (if for no other reason so that people would play with you again) and handle losing well (same reason). We don’t learn these skills when everything is given to us, like the algorithms in a video game or the preexisting structure of incessant summer-league ball.

And, we certainly don’t develop their imaginations in these ways. One of the older parents we admired the most when raising our own kids used to tell their kids when they complained about being bored: “What you’re telling me is not that you’re bored, it’s that you’re boring.” What they meant was, “you lack the imagination to create something fun, so go create, kid.” As I hope we all know from growing up, playing through boredom teaches us to create, to imagine, to problem-solve–all are so-called “21st century skills” we learned long before this century peaked its head over the horizon.

Haidt notes that free play prepares children for the “art of association” that is the key to a vibrant American democracy, or to living within Christian community-to be able to interact with others and resolve conflicts without needed mediating influences, like governments, courts, and social media, to do it. Without the art of association, the world, and our children, become more apt towards conflict and stunted social skills.

And, while I certainly have no problem with summer-league ball, everything I’ve ever seen in 20 years of education says keeping it in serious moderation, not as a substitute for the other things in this blog, is the best approach.  I’ve never seen a kid who was a legitimate college Division 1 athlete prevented from playing at the next level because he or she did not travel all over creation playing ball every night and weekend, and I’ve never seen a kid who was not a legitimate Division 1 prospect become one because he or she did so.  And, I’ve seen the adverse effects on families from too much time spent traveling all over. My coaches all tell me athletics should be a year-round drip, rather than a fire hose. If there are still leagues out there where you can play, have fun, and enjoy these other aspects of life, do it. All things in wisdom and moderation, right?

It’s hard for me to overemphasize how much, as a general rule, your kids’ relationship with Jesus will be defined by how and what you model. There are absolutely exceptions, but “training up a child in the way he (or she) should go” is still solid wisdom. So much of young adults straying away from their faith is rooted in the fact that it wasn’t that important to their parents when the kids were younger. Even where I’ve seen older kids stray, when their parents are committed and passionate about their faith, they usually come back sooner or later.  But these healthy habits are set year-round, and kids are watching, and they notice, and they care. As you’ve heard me comment before, researcher Christian Smith, after nearly two decades of research on American youth and faith, has come to the conclusion that “we get what we are.” Our kids, to a large extent, become what we model.

I hope you have a fantastic summer. Rest well, eat well, enjoy your family and God’s many blessings. Life has such a frenetic pace; take advantage of this sweet time to breathe.