You are here: Home / Prayer / All for Another 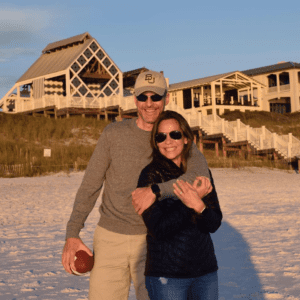 That moment will hum in my memory, and resonate into eternity forever. Twenty-eight years this past week.  April 23, 1994. Perkins Chapel on the SMU campus, 11 a.m.  I’m standing at the front in my goofy morning suit, looking like I’m heading to Pippa Middleton’s wedding instead of my own, sunlight shining down, not really believing I’m actually there. They doors fly open, and this vision in white burns across my retinae. As she comes floating down the aisle from the back of the room, I’m confronted with the most beautiful thing I’ve ever seen. I’ve watched many weddings, and seen many brides graciously looking around the room as they processed, greeting the guests, taking it all in.  Not mine.  Mine locked her eyes on me the whole way down, as if we were the only ones in the room, the only ones in the world in that one, transcendent moment. I’ll admit it, I’m a big baby. I lost it, completely overwhelmed by God’s unfathomable grace in providing someone so very excellent in every way to be my partner for life. Twenty-eight years later, I still can’t.

To love is to be all for another. To say I am hard to love is an understatement of historic proportions. I’m prone to hyper-frustration when things don’t go my way; I’m a type-A personality of the most intense sort, a driver who wants things done yesterday, and who is constantly struggling with the patience to let God be God and work in my life. I’m ADD, so I get distracted, forgetting to do the things she’s asked me to do, often right in the middle of doing them.  Our house is littered with abandoned projects and good intentions. For reasons rooted in youthful challenges, I’ll sometimes just disappear for an hour or so, not telling anyone where I’m going. I’m borderline obsessive about working out and running as a way to manage stress, maintain focus, and sleep. And, these are my more attractive traits.  Others I’d never write in this blog.

To have someone who truly knows me, to be truly known, both the real me and the me I really want to be, and to be loved despite all these things is stunning. There’s a line in the musical Les Miserables: “To love another person is to see the face of God.” I would add, to be really loved is to see His face. There is nothing like it, and no one else knows and loves me this way.

I heard a long time ago that the purpose of marriage is to make you holy first, rather than happy first. Happiness can come, but not if you’re unwilling to let your marriage be a beautifully sanctifying thing. I’ve always said to my wife that I’m not perfect (surprise!), but I’ve tried to be perfectable,  to be open to learning, and letting our marriage mold and form me more into the image of Christ.  Despite my thick-headedness, I have actually learned a few things about such change over the years.

People actually say, “Marriage started well, but then she tried to change me.” What’s wrong with that? If you’re selfish, bull-headed, and obnoxious, would anyone who actually loved you be satisfied for you to remain those things? Wouldn’t you want to be married to someone who had a little vision for you, and actually saw you as you could be, rather than as you are? Doesn’t God actually see you that way? Even though He loves you fully as you are now, doesn’t He envision you as something more?

People marry people all the time hoping their spouses will grow into someone better. The key is how you help your spouse change. If you do it by bullying or nagging or manipulating, these are selfish, human-centered ways of changing someone. If, instead you ask God to mold them through the Holy Spirit, then praise and love them through that sometimes painful process, while they do the same for you, that’s one of the grand designs of marriage. I’ve seen this as my wife and I have used our rough edges to smooth out each other over the years.

My wife is my rock.  I’m a passionate guy, and emotionally at times I’m kind of like a fire hose at full blast with no one hanging on to it, flailing uncontrollably up and down, side to side.  I come from a dysfunctional family, one for whom conflict resolution looked like vomiting on each other emotionally until we were finished, and the shaking hands and walking away, the verbal equivalent of two middle school boys in days of old meeting at the bike racks after school for a fight.  My wife comes from a solid and generally-healthy family, and she is steady and calm.  Yet, she would tell you her family were “stuffers,” avoiding conflict by clamming up. So, when we were young in our marriage and conflict would arise, I would respond as I had been taught to do, by raising my voice and getting louder. She would respond as she’d been trained, to close off and shut down. As you can imagine, this made for a toxic cocktail. Coupled with all of this, I was a lawyer, trained to win any argument, which did nothing to help the “clam up” thing with my wife.

At one point the Holy Spirit hit me like a ton of bricks– I realize that when I “won” an argument, we would lose as a couple. If I gained the world and lost my marriage, I was just a loser who could argue well. I realized that leading out in our marriage meant leading in conflict resolution, in seeking forgiveness, and in patiently trying to draw her out. Over the years, I started resolving conflict by actually talking with a calm voice, and listening, and asking questions, and she began actually telling me what she was feeling and thinking. In so many ways like this one, we’ve become each other’s sanctification partner.

I’ve been married to at least three different women in my life, and they were the same person. She has changed several times over the years. There was the “newlywed, figuring-it-out” wife; the “stay-at-home mom of young kids” wife; the “successful businesswoman, managing a family” wife; now the “empty-nester at peace with herself, trying to make her own, new way” wife (never having only been a wife, of course, but that’s who she was for me-she’s been many things to many others, which is really cool). I have enjoyed being a student of each of these women, and learning to love each of them by providing the things they need as they’ve changed and I have tried to love them well. Each has needed different things from me in different phases of life, and I hope I’ve become a better listener, more attentive, and more flexible student along the way. As she’s changed, I’ve changed, in mostly good ways, I hope. God has been gracious in that way.

I was taking an Enneagram test the other day. For those who know the test and me, it probably won’t shock you that I’m an 8, the Challenger- strong, assertive, action-oriented. But, Eights can also be willful, domineering, and bad-tempered (think Winston Churchill). At their best, however, Eights can be measured, willing to be emotionally open and available to others, secure and grounded in themselves, and living with inner peace.

As I reviewed that list, I realized that over the years God has tempered me by His grace away from many of my worst tendencies, and led me towards (with baby steps!) my best. And, He has taught me almost all of these things, in part or in whole, by being married to my wife. Many years ago, I read that the secret to a great marriage is to lean into the Lord as the source of your identity, your security, your strength, your value, and your worth. You were intended to get all those things from Him, and no woman (or man) can ever provide those for you. Once you have those necessities from the Lord, it frees you up to lovingly serve your spouse, to sacrifice for them, and not expect them to “meet your needs.” Because they can’t; they weren’t created to be able to do that. You weren’t, either.

Over the years, I’ve held onto that truth, pressing into the Lord, trusting in Him to give me those things I need, and trying to love her sacrificially and well. The number of times I’ve failed are legion, but God’s given us plenty of grace to fall upon as we’ve fallen into each other again and again.

You love in a deeper more intimate, more companionate way when you’ve loved someone so long. I never used to understand how old guys died so quickly after their wives passed away. Now I totally get it. There’s something way more than an unhealthy codependence at play there; there’s something mystical and beautiful that God does, to become flesh of flesh and bone of bone. It’s a joining that isn’t a union of souls, but a union of essences, so complete that people don’t always survive the separation. Despite the pain at the end, God gives a richness so full that it makes it all worth it.

To love another person is to see the face of God. I think that’s true because to truly love is to sacrifice deeply-love is stronger than death, like King Solomon says, because it requires death: death to self, measured by what you give up, rather than what you receive. Yet, once you have a humble self-awareness of all you actually are, who you are in all your pettiness and smallness and worldliness, the thought that someone else knows all that intimately and still loves you and commits themselves to you for life transforms you. The payoff is that you get to see the face of God, who loves you that way, and you are never the same.