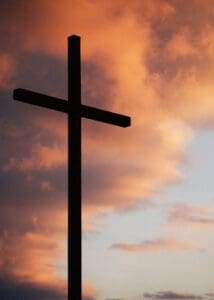 As I think about Easter and Holy Week, I reflect on the film, The Passion of the Christ. It’s hard to believe it was a 2004 film, almost 20 years old. It was a great movie, but I have to admit, I only saw it in its entirety once, in the theater, nearly 20 years ago. And yet, it still haunts me, like only yesterday its brutality and beauty burned its way into my soul. Those images resonate with me every time I dwell on Christ’s crucifixion.

Reading the gospel accounts of Jesus’ passion, His “passio,” His suffering or “great pain,” also has that effect on me. I want to skip over these passages, or simply skim them, not plunge too deeply into the pain and horror of suffering inflicted on someone I’ve come to deeply love. And, yet, for all the grim cruelty of Christ’s passion, the thing that resonates with me most deeply is Christ’s kindness and gentleness in the midst of it all.

At the Last Supper, knowing full well that Peter is about to betray Him, Jesus encourages Peter by telling him that he is praying for him. As Jesus is captured by the Roman guards, Peter lunges to His defense, grabbing a sword and removing the ear of a servant. Christ returns the servant’s ear to its place. In His last act of physical healing, Christ restores one who has come to kill Him.  On the cross, He gives forgiveness to a thief, and begs His Father to forgive everyone who committed these atrocities upon Him. And, what does He call Judas, his betrayer? He calls him “friend.”

If there’s one characteristic that most captures Jesus, it’s His gentleness, His kindness. As Dane Ortlund says, when Jesus describes Himself, the core of who He is, it is as one who is gentle and lowly in heart. (Mt. 11:28). “This is who he is. Tender. Open. Welcoming. Accommodating. Understanding. Willing. If we are asked to say only one thing about who Jesus is, we would be honoring Jesus’ own teaching if our answer is gentle and lowly.”

This characteristic isn’t just manifest in the last week in His life. We see Jesus as gentle and lowly throughout His ministry, even when doing so flies in the face of general prejudice and hatred around Him.  Zacchaeus is a tax collector, cheating his own people with Roman authority, hated and feared by those around him. Jesus calls Zacchaeus into fellowship, and then into repentance.  The woman at the well, a Samaritan woman of questionable reputation–multiple layers of scorn–invited by Jesus into conversation, then new life. Yet another woman, this time caught in adultery–a capital offense–sentenced to execution by a lynch mob, loved by Jesus, not condemned, free and forgiven to live a new life.

The common characteristic of these encounters? People that the world around them hated, people of ill repute, canceled by society, subject to scorn, members of the outgroup, marginalized even–maybe especially–by the so-called religious of the day.  Engaging with the gentle lowliness of Jesus, these scandalized few are transformed to new life forever.

We know something of cancellation in our culture, don’t we? We live in an era where gentleness and lowliness are in short supply.  We are quick to speak, slow to listen, and prone to rapid anger, an anti-Jamesian approach to social engagement. We judge quickly, and immediately cast others into ingroups and outgroups based upon labels we manufacture for them.  And, although we accuse the other side (whoever they are) of doing these things, these divisive tendencies cross political, social, racial, religious, and other dividing lines; we’re all guilty to lesser or greater degrees. We’re quick to categorize others as Marxists or fascists, liberals or alt-righters, allies or crazies. If someone doesn’t think like us, rather than persuading or wooing, we shame, ostracize, and cancel. And, as Christians, are we truly less inclined to these harsh ways than others? Are we the salt of the earth, or do we contribute to its bitterness?

The answer to such a divisive, wrathful culture is a gentle answer. A gentle answer turns away wrath (Prov. 15). Scott Sauls notes that because Jesus offered us a gentle answer instead of pouring out righteousness and indignation for our offenses, we can offer the same to those who offend us. “Because Jesus has covered all our offenses, we can be among the least offensive and least offended people in the world.” By letting Jesus mold and form our hearts, He can transform us into gentleness. Gentleness allows us to grow thicker skin, handle anger well, receive criticism graciously, and bless those who offend us.

The only way to be people of gentleness is to accept the love and forgiveness of Christ; not simply to accept it in our heads, but as the abiding, motivating truths of our lives. It’s taken me years to begin to accept the depths of how much God truly loves me. It’s hard to believe it, and my past and my self-understanding fights it. But, people who know they are truly loved by their Father are people who truly love.  Our ability to love people around us–not just the “easy to love,” like family and friends, but the hard to love, the “other,” the outgroup–is an outward expression of understanding the extent of God’s love for us.

We also need reminding that we’ve been forgiven and restored. We’re studying the Mosaic Law in my Bible study group, and it’s striking to me how every time God tells the Israelites to care for the widow and orphans, or show hospitality for the foreigner, or extend welfare to the poor, or render any other act of love or justice, He reminds them, “do this, because you know what it is like to be foreigners, to be slaves in Egypt.” He provides these frequent reminders because He wants them never to forget that they had been rescued and redeemed, and that they were no better than the ones to whom He called them to extend mercy. Those who have been forgiven much, forgive much. It’s much easier to extend gentleness to others when we keep the gentleness of Golgotha consistently before us.

Being gentle isn’t simply being nice; it’s not some kind of soggy, milquetoast response in the face of angry strength. As Sauls says, “make no mistake: Jesus’ gentle answer was bold and costly. His gentle answer included pouring out his blood and dying on the cross. Our gentle answer will be costly as well. We must die to ourselves, to our self-righteousness, to our indignation, and to our outrage.”  Being gentle requires toughness and inner strength. But, the reward will be the return of our hearts and souls from the pit of callousness, anger, and tribalistic hatred.

The battle for the transformation of this divisive culture in Jesus’ name will be in the hands of the reconcilers, the gentle and the lowly. Jesus wasn’t just demonstrating His deity by being gentle and lowly in the face of Golgotha’s brutality and horror; He was giving us the model by which we are to channel Him and change the world around us.