You are here: Home / Prayer / A Completely Other Thing 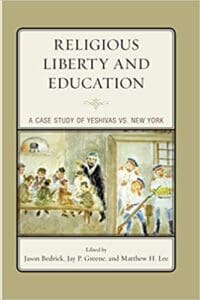 On Tuesday, I sat on a panel discussion of educators and policymakers at the Heritage Foundation in Washington D.C. The purpose of the panel was to discuss a book all the panelists contributed to entitled Religious Liberty and Education. The book was a collection of essays arising from the Yeshiva controversy in New York state. Yeshivas are schools dedicated to study of Jewish texts and religious tradition, in this case located in Hasidic, Orthodox Jewish neighborhoods. The state of New York, responding to a handful of complaints by alumni of these schools, declared an intent to subject these and other religious schools in the state to inspection by education department officials, and to potentially close schools that weren’t providing a “substantially similar” (whatever that means) education to the type provided in New York public schools.

A group of religious and independent private schools, including Catholic, Jewish, and non-sectarian schools, challenged the state’s action in court on religious liberties grounds. Religious Liberty and Education is a collection of essays discussing this controversy in the context of parents’ rights to choose what kind of education their children will have, states’ interests in the education of their citizenry, and the right to educate children according to religious conscience.

So, why am I telling you about all this? These issues really aren’t about yeshivas in New York City, at least not primarily. The issues raised in this dispute highlight something we all need to be reminded of, time and time again, a truth about Christian Education: that Christian education is a completely other thing from its public-school counterpart.

During the second half of the 20th century, decades of court constitutional interpretation, built around the concept of separation of church and state (which is not actually in the U.S. Constitution, but is a doctrine interpreted from it), required the public school system in the U.S. to provide a common education for the broadest possible base, which caused courts to strip it of any trappings of religious affiliation.  One can argue how truly Christian prayer in school actually was, but at this point, absent these trappings, the public school system in America, or in your neighborhood, necessarily embraces a secular, naturalistic way of looking at life by operation of law. This isn’t the fault of your local superintendent or public-school teacher, who may be your friend, and it’s not a knock on them. They may love Jesus dearly.  Those folks are my friends, too. But, this is just the hand they’re dealt. It is what it is, and how the law compels it to be. Because of this perspective, there are lots of different goals and outcomes of public education: to prepare students to be good citizens, to get into a good college and enter the workforce, and to be self-realized are just a few.

In contrast, and as Calvin College professor Jamie Smith has said, “the primary goal of Christian education is the formation of a peculiar people, a people who desire the Kingdom of God and thus undertake their vocations as an expression of that desire.” If Christian education is going to be truly Christian and transformational, to change the way our students think and feel about life, and live in a very counter-cultural way, a way committed to ideas like humility, and grace, and the pursuit of truth, and love, it has to embrace a foundation and philosophy that is uniquely Christian, rooted in a vision of the world and creation as revealed in the Bible, the totality of the Old and New Testaments. These philosophies are radically different (and seen by most as opposed) to those ends and philosophies inherent in public education in the U.S.

Here are a few examples: in the Christian way of thinking, angelic and demonic beings are part of the fabric of reality, impacting and influencing life on earth and the interactions of human beings.  God, of course, is the ultimate supernatural being, the creator of everything. God is not deistic, setting the world and the cosmos in motion and then walking away. Instead, He is sovereign and actively involved every day in the affairs of humans and creation.

This idea of an active, creator God has major implications for weighty issues like identity, truth, nature, and the universe. Think about identity. I could (and probably will) write a whole blog on this, but, when you think about it, the secular, naturalistic view of identity is self-referenced, meaning that we are who WE say we are. We define our identity, and create meaning from the stuff around us. This is why people can identify as whoever they want to and, for the most part, everyone agrees with that identity. By contrast, in the Christian worldview, humans are largely externally-referenced beings, created in their Creator’s image and defined, to large extent, by the nature and character of God- I am who God created me to be and who He reveals to me that I am, both in who I am and how I relate to other people (even though I’m distorted in that image by the fallenness of sin).

Identity isn’t the only thing rooted in the nature and character of God, according to the Christian worldview. Truth is, as well. Truth defined by God; He is the definition of truth and the revealer of truth. Because God is unchanging, truth, in the Christian way of thinking, is perceived more as absolute and fixed, like God. In the secular mindset, where it is rooted in each individual’s conception of it, truth is relative, because I may define it differently than you.

Given the Christian perspective that God is a sovereign and active God, who has the freedom to act and does act upon his creation at his election and will, a Christian worldview perceives creation as an open system. It is not, as the famous metaphor indicates, a watch. Or, if it is, it is a watch with the back removed, the Watchmaker constantly turning dials and gears.  A naturalistic perspective, one necessarily embraced in a public-school context, is of nature as closed system, very complex and intricate, but confined within the system itself. The box (all that is) has a lid on it, and there is nothing outside the box. One cannot know anything through faith; it has to be contained within the box to be real.

All of these Christian perspectives on identity, truth, and nature lead to distinctively-different ways of viewing the Christian school’s entire curriculum and instruction; not just through science, but in politics, language, math, history, and everything else we teach in school.

The point is, because of these dramatically-different ways of thinking about the world, the cosmos, life, and ourselves, Christian education cannot be “significantly equivalent” to U.S. public education. Ever. To suggest that public school education and Christian or other religious education can be substantially equivalent because both teach English and math is to suggest that a Subaru and the Space Shuttle are substantially equivalent vehicles because both have tires and windows. One is dramatically different than the other, and even a really strong Christian teacher in a non-Christian school environment can’t come close to replicating Christian education.

When we survey our families, they tell us the number one reason they choose Christian schooling for their kids is because of a “biblical worldview.” Although they might not articulate it in the way I just did, this is what they mean. Christian education is a completely other thing, and it produces kids who, by God’s grace, the movement of the Holy Spirit and in His timing, are formed differently, into peculiar people, who desire God’s Kingdom and see their work as their calling.  As I’ll talk about next week, this small band of peculiar people, with their “strange” way of looking at the world around them, were not only essential to the past 2,000 years of culture, but they are essential to the best ideals of the American republic and the common good.