You are here: Home / Uncategorized / Remembrance 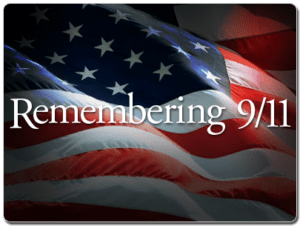 There were those seminal moments in American history where everyone alive remembers exactly where they were. My grandparents used to tell me about being in church on Sunday morning, December 7, 1941, the day they discovered the Japanese attacked Pearl Harbor. That day changed our nation forever, and ushered in The American Century. My mom was in her sorority house on November 22, 1963, at SMU, and remembers being shocked to learn of the horrible events transpiring that day just miles away from her, a charismatic president’s life snatched away in an instant.

Our generation has its own such moment. On September 11, 2001, I was sitting at my desk as a young, newly-minted partner in a downtown Tyler law firm: young wife, a four-year-old in her first few weeks at Grace Community School junior K, two-year-old at home with Mom, seven-month-old baby protruding precociously from Mom’s abdomen, my whole life ahead of me, a young professional, bright prospects ahead. Around 8:00 am, my friend Eric called from upstairs to tell me it seemed that a small, private plane had just crashed into one of the twin towers of the World Trade Center.  I remember being sad, yet perplexed. How could someone accidentally miss such an obvious obstruction, making such a horrible, obvious error?  Was it an accident, or a suicide? I dismissed the thought and got back to work. About ten minutes later, Eric called again: second call, second plane, second tower.  With that call, like so many others, my world changed forever.

Over the next few days, as the story unfolded and the truth became known, as I watched friends of mine traveling around the country having to buy vehicles from dealerships in cities in which they were stranded just to return home after every flight in America was grounded; as I tried to get my mind wrapped around watching video of human beings choosing to plummet from terrifying heights rather than burning alive; as I saw families of lost loved ones grieving in unfathomable ways, I cried more and from deeper places than at any point in my life. I know all of us alive at that time were impacted profoundly, but for this young daddy, thousands of miles away from Ground Zero, those fateful moments spawned an existential crisis.

Over the next two months, I questioned everything about what I was doing. In a world where one’s life, even those of young dads with lots of prospects, could be taken in an instant, what was it all for? What was the eternal value of what I was doing? Other than simply providing for my family, whose lives were better for the life, the career I had chosen? Wasn’t I really just helping people move decimal points on their balance sheets to the right or to the left? Who was being enriched by all of this? Was God being glorified and honored? How was I preparing this frightening new world to be a better place for my girls and their friends? None of these thoughts to cast aspersions on the nobility of the career I chose- it was a good one- yet, God was clearly using a terrible time to pry my fingers from my prospects in that moment.

I drank those depths of despair and crisis for about two months. In late October, the phone rang. A call out of the blue. The executive pastor from Grace Community Church was on the line. The development director at Grace Community School, my daughter’s school, had recently left, and they were looking for a new director. Here’s the job description, the ministry profile. Are you interested?

What would have seemed laughable, crazy, outside the bounds of possibility two months earlier now seemed foregone, intended, meant to be. Even my nearly eight-months-pregnant wife, now in full “nesting” mode, responded to my fearful approach, “you should totally do that!” Our friends and my parents (who had invested in law school) thought we were insane for walking away from all that, and by some measures we were. It made no earthly sense. But we knew. Jesus was on the move. God, in His always-enigmatic providence, had been directing us since that early September day.

One-and-a-half years and a 65 percent pay cut later, one of the wisest men I’ve ever known and our former head of school retired, and, equally incomprehensibly, recommended me to succeed him as his replacement. Now, twenty years later, three little girls are Grace alumni, and I’ve handed a thousand graduates a Grace diploma. Everything has changed. We can’t just walk into a school anymore without a key fob or checking in the lobby. Nor can we walk a friend to his flight at the airport gate anymore. We continue to wrestle with the questions of 9/11 and its aftermath, and mourn with and for families who lost everything.

And, yet, no matter how bad any given day, whether I’m dealing with unruly teenagers, or angry parents, or broken air conditioning units, or global pandemics, one thing is certain. There has never been a day since that one when I have looked in the mirror and asked myself the same existential questions. I know my family more deeply, my school community profoundly, and my Lord intimately. All those questions were answered for me, by God’s grace.  God is a god of beauty from ashes, of glory from horror, and it’s such a God thing that a day so marred by suffering and death could also bring forth rebirth in my life, and, in a small way, set a different path for our school community. For me, every day at Grace is a remembrance of that September morning 20 years ago, and an opportunity to honor the Lord and everyone left in its wake.