You are here: Home / Christian Education / Standing Firm in Truth and Hope 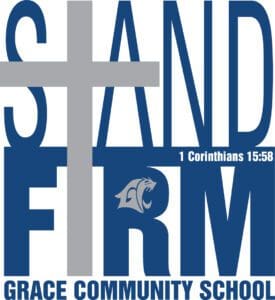 Is it just me, or does there seem to be a larger number of angry yellers and drama queens among parents in our culture than in the past? Why is that?

I don’t know if you read Jim Denison’s The Daily Article. If you don’t subscribe to it online, you should. He’s going to join us as our guest at our Grace Fund speaker event and auction in November. Dr. Denison is fantastic at helping Christians grasp truth in a confusing world, and I think it would be a gargantuan understatement to say we live in confounding, angry, anxious times.

A couple of weeks ago, Dr. Denison was quoting David Arnott, a professor of management at Dallas Baptist University, who shed some light for me on why people tend toward anger and anxiety. Dr. Arnott noted what he calls the “negativity bias,” the inherent human tendency to believe that whatever times we live in are the worst times, ever, in human history. While negativity bias rules even today, Arnott notes the statistics don’t bear out such pessimism:

I think there are several reasons for our negativity bias. One, is that we live in a broken, fallen world, and our natural minds tend toward fear whenever we live. Anger and anxiety are just an outworking of fear. Secondly, maybe because our minds as humans are naturally inclined that direction, negativity sells. Media is designed to feed that natural inclination within us, because the algorithms that feed us media are designed to give us bad news, exactly how we want it.

In his remarkable book, Desiring the Kingdom, philosopher James K. Smith notes that we are not primarily thinkers and doers, but lovers.  And, Smith says, we are what we love. What we spend time on, what we invest our money in, what we think about, is what we love. Smith says our affections, our loves are shaped by what he (and the church through the ages, by the way) calls liturgies-repetitive practices that, when engaged in over and over again, shape our hearts and incline our affections a certain way, which ultimately mold our behaviors.

Now, think about that in the context of media. Day after day, hour after hour, being fed an echo chamber of things we already think we believe, constant reinforcement of negativity, things that may or may not actually be objectively true. We are liturgized, our hearts are shaped and molded. And, before we know it, we’ve become different people.

And, these liturgies, masquerading through some types of social media, is just one tool the devil uses, because he’s the enemy of our hearts, and the killer of our joy and hope, not people, political parties, pundits or positions. In John 8, Christ tells us that Satan is our father when we are dead in sin, and “when he lies, he speaks out of his own character, for he is a liar and the father of lies.”  Satan is going to attack us every way he knows how, especially us, educators and parents, those charged with preparing Christ’s church for the next generation, in ways that are specific to us: our unique pride, our insecurities, our faulty ways of looking at life pre-disposed through the individual brokenness of our families of origin, or past sin, or past hurts.

But, we have a new Father, redeemed by the blood of Christ as we are. Our Father is the God of Truth, and Truth is defined by God’s character and His being. As God’s people, we are His bringers of Truth, as well as the hope that comes with that Truth. I’ve been reading The Rise and Triumph of the Modern Self, in which historian Carl Trueman encourages Christians, as bringers of truth and hope, to reframe our natural negativity bias: “it is truly very hard for any competent historian to be nostalgic. What past times were better than the present? An era before antibiotics when childbirth or even minor cuts might lead to septicemia and death? The great days of the 19th century when the church was culturally powerful and marriage was between one man and one woman for life, but little children worked in factories and swept chimneys? Perhaps the Great Depression? The Second World War? The Vietnam Era? Every age has had its darkness and its dangers. The task of the Christian is not to whine about the moment in which he or she lives, but to understand its problems and respond appropriately to them.” And, as parents and educators, our task is to train the young followers of Jesus who God has given us to do the same.

That’s why we have to stand firm in the truth and hope that comes from the Lord and in His Word. Maybe we need to focus less on quoting media and studies and podcasts and celebrities, and more on finding truth and hope in the source of it all: the Word of God.

These threats are not unique or novel to our era; we struggle as God’s people have struggled for eons. Satan has been throwing these things at Christ’s church to distract them from its mission throughout its existence. The Corinthian church was seriously confused and anxious, as well. In a large, wealthy, cosmopolitan city, it had let the insanity of the world, and the enemy working through it, take it seriously off course. And, Paul was calling it to truth and hope.

In I Cor. 15, Paul lays a groundwork of truth to ground the Corinthians in a culture of groundlessness: I would remind you, brothers of the gospel I preached to you, which you received, in which you stand,  and by which you are being saved, if you hold fast to the word I preached to you…for I delivered to you as of first importance what I also received: that Christ died for our sins in accordance with the Scriptures,  that he was buried, that he was raised on the third day in accordance with the Scriptures,  and that he appeared to Cephas, then to the twelve. 6 Then he appeared to more than five hundred brothers at one time, most of whom are still alive, though some have fallen asleep. 7 Then he appeared to James, then to all the apostles. 8 Last of all, as to one untimely born, he appeared also to me. Paul reminded them of the gospel, of the Truth: who Jesus is and how He fulfilled the Scriptures and appeared to them.

Paul also reminds them that they have hope, that despite their present circumstances they would be given an imperishable resurrection body, and live in a New Jerusalem without pain or sorrow, forever. Because of this truth and hope, they should stand firm in what they had been given: Therefore, my beloved brothers, be steadfast (or stand firm), immovable, always abounding in the work of the Lord, knowing that in the Lord your labor is not in vain. (I Cor. 15:58)

Paul’s encouragement rings true through the ages to our culture, as well. Our school theme this year is Stand Firm. “Standing firm” doesn’t mean subscribing to our own pet theories, or desperately seeking truth from some celebrity (whether political, podcaster, or other “influencer”). It doesn’t mean being stubborn, or arrogant, or unyielding, or insisting on our own way; it doesn’t mean cutting, or biting, or blasting, like the guy standing on the corner with the bullhorn and the sandwich board. “Stand Firm,” as I Corinthians 15:58 indicates, means persevering in being firmly rooted in God’s Word, doing the Word, rather than simply talking about it, and trusting that our work will yield God’s perfect result over time, for His glory and our good.

I read a book this summer called Dominion, by Tom Holland, a historian of antiquity. In it, Holland sets forth the entire history of Christianity, from 145 B.C. in the Greco-Roman era, to 2015. What’s clear from his account is that, no matter how dire the surrounding circumstances or how faithful or unfaithful God’s people were at any given point in time throughout history, God has relentlessly done His work, accomplishing His goals and building His Church and His Kingdom throughout the ages. He doesn’t need us to do so; He’s God. But, He loves us and wants us with Him, and wants to teach us through it all, like a loving Father taking His child to work. I pray this year our school community will stand firm in the truth and hope of the Lord, be bringers of Light to the world around us, people of calm spirits and peaceful hearts, and filled with the shalom that comes with pressing into Him.