You are here: Home / Uncategorized / Stuff Your Mom Said 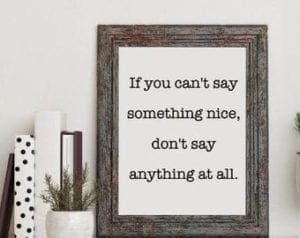 My mother is a southern belle, a steel magnolia, and a force of nature.

She was born in Tyler, in the house I raised my girls. Her father died when she was seven. She was raised by an emotionally-distant mother who didn’t know how to handle the grief of being a widow, but did the best she could.  Despite having the deck stacked against her at an early age, Mom was more than a survivor; she was a thriver.  Raised in part by three spinster aunts who taught her to be smart, independent, and a lady, Mom became all those things, in spades.

My mother is a study in contrasts. She overreacts to the slightest thing, like water spilling from a cup, yet when the you-know-what really hits the fan, and someone is sick, hurt, or in the hospital, no one is better in a crisis. She throws nickels around like manhole covers, downright miserly when asked to spend something on herself, yet no one is more generous with other people; she can say something that will strip you to the core, yet have the self-awareness to readily admit she’s wrong and seek forgiveness. And, while losing her father early probably handicapped her later track record with men, no one has ever loved her son more.

Being a native East Texan, my mom is known around our family for her sayings: “That dinner must have been bad; honey, it went through your sister like Sherman through Georgia,” (for those who are not Civil War buffs, google “Sherman’s March to the Sea”); “Bless his heart, he’s not that bright, he doesn’t know ‘come here’ from ‘sic ‘em’”; “That man is rich! He has more money than Carter has oats.” (I can’t help you here; I have no idea who Carter is).

We all need our mom’s advice now, don’t we, as the world seems angrier and so many seem to be on edge, gathering injustices and grievances to make themselves unhappy? God doesn’t want us to live that way, doesn’t really give His disciples that option. Our lives are the gracious antidote to a toxic world: “ Do not repay anyone evil for evil…as much as it depends on you, be at peace with all people…do not be overcome with evil, but overcome evil with good.” (Romans 12). As I was thinking about our community, and coming out of COVID, and loving each other well as disciples of Jesus doing life together, some of those sayings my mom shared with me through the years are helpful guides as we learn to do life together again.

“If you can’t say something nice about someone, don’t say anything at all.” What would social media look like if everyone lived out this advice from our moms? And, yet, why do we feel compelled to say whatever’s on our minds, safely hidden behind our keyboards and screens? The whole cancel culture is about hanging labels on people, or caricaturing them as one-dimensional issues or ideologies, and using these easy characterizations to deny their dignity and value as image-bearers of God, erasing their right to be seen and heard. Speaking ill of others, or ignoring them altogether, is far from the heart of God. I memorized James 1:19 at an early age, because I needed it so badly, “and let everyone be quick to listen, slow to speak, and slow to anger, because the anger of man doesn’t achieve the righteousness of God.” In this ugly age, we have a better than ever opportunity to stand out by being salt and light through holding our tongue (and our thumbs!) and speaking words of life.

“You can’t judge a person unless you’ve walked a mile in their shoes.” There’s lots of ways we can follow this sage advice, but one that’s particularly relevant today is asking for and extending grace to each other for the past 12-14 months.  If you’re an Avengers fan, you remember when Thanos used the infinity stones to send half of the earth’s population into oblivion for five years, until the Avengers could get them back? That five-year hiatus was called “The Blip.” When people return, there was a huge adjustment as they realized life and people have moved on without them for five years.

For all of us, COVID is like “The Blip.” Everyone suffered. Everyone lost someone they cared about, or who was close to them. Some people’s suffering happened behind closed doors, or inside their heads. We can’t see it, and we don’t know it. And, they don’t know ours. It was really hard. Given all this, isn’t it unreasonable to be offended or hurt because other people didn’t engage you or show you the concern you think you deserved during “The Blip,” or even to beat yourself up because you haven’t met your own expectations for being a good friend?  We’ve all been through “The Blip,” and we can’t judge other people without really understanding what it was like to walk in their shoes, to be them, to suffer what they suffered. That’s called empathy and understanding, and feeling it, and extending grace and forgiveness to ourselves and others for what we did and didn’t do during this season of our lives is a major foundation to restoring community.

“You can tell a lot about a person’s character by how they treat someone who can’t do anything for them.” This is one of my favorite things my mom said, because it was profound and fairly unique.  We all treat people well who can help us get ahead, or bring us business, or make us look better, or provide perceived value to our lives. That’s just being wise, striking a good bargain, good business. But, what about those who really bring nothing to our table?  Who caring for is a perceived net loss for us, or actually costs us something, like money, or power, or esteem in the eyes of others?

We’re surrounded by people who are impoverished, disenfranchised, marginalized, and in need. You know, the people Jesus actually loves and cares for? COVID wasn’t their friend. In many ways, it left them worse off. How we love Jesus, whether we are truly His, whether we are people of love or something other than love, is and will be defined by what we do in their lives now. That’s what leaving gleanings, and not charging interest, and the year of jubilee, and all those just practices of God in the Old Testament were all about. To teach us that God cares for all His people, not just the ones the world calls pretty, and if we are His, we will, too.

My mother taught me to cheer for the underdog, that my character would be defined by how I really loved people: by whether I was willing to give sacrificially to enrich their lives, knowing it would do nothing for me. In short, my mom taught me the heart of God.

How much richer and fuller and closer to God’s heart would we all be if we had just listened more to our moms? We love you, moms. Keep talking. We’re listening, even if we pretend we’re not.