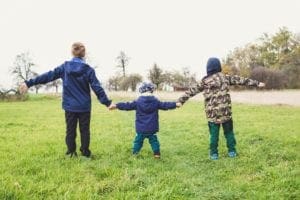 This past weekend, I did something really fun. I attended a wedding of one of my childhood friends. Not a kid with whom I went to high school, or played football together, but a neighborhood kid.  You know, the kind you’ve known since you were four or five years old: all your life.

My friend, James, moved into the neighborhood when he was three. Turns out he had lost one of his fingers in an exercise bike as a baby.  When you’re a kid, and new in the neighborhood, not having a finger makes you an instant hit, and he was.  But, it was his older brother, John, who became my best friend. John, who would show me rocks in his driveway and said claim were dinosaur teeth. I totally believed him. John, with whom I would build countless haunted houses and carnivals, and charge the younger kids five cents to walk through them.  John and I discovered Star Wars together, seeing it seven times in the theater (long before Netflix, cable, or even VHS). We would later share a love for music, developing a taste for bands like Rush, Van Halen, Journey, and Styx, groups that would one day form the core of classic rock.

I lived on a block with about 40 kids in my native Dallas. It was a completely old school experience. Our moms would send us outside to play in the summer at 8:00 am, and we wouldn’t come home until nightfall. If it was 40 degrees or 95, we’d be out, walking barefoot and playing baseball in the street on pavement so hot I couldn’t look at it without burning my eyes today.  In the winter, after all our parents would put out their dead Christmas trees, we’d have Christmas tree wars against the kids on the next block, building forts and stockpiling trees, trying to steal them from one another. Kip Snowden was the “big kid” on the other block, their secret weapon. We’d be so afraid of a beating from Kip that we’d just let him take all our trees. We’d always get our revenge, though. John and I didn’t really have bedtimes or curfews, so we’d be able to sneak in, under cover of darkness, and steal back our trees.

Last Saturday, James invited all the kids from the block to his wedding. I had a great time, visiting with people I hadn’t seen in 30 years. We were instantly transported back through the years, speaking to each other in shorthand, a lingo mutually earned as a member of the “Belfort Bunch.” It was wonderful, better than a high school reunion, because, as Richard Dreyfus observed in the classic, Stand by Me: “I never had any friends like the ones I had when I was twelve. Does anyone?”

As I’ve said here before, growing up had its challenges for me. My friend John’s life wasn’t easy, either.  He and I weren’t just rock fans; we learned from our parents at a really young age to love “I’m So Lonesome I Could Cry,” by Hank Williams, “You’ve Been Talking in Your Sleep,” by Crystal Gayle, and other really sad, tragic, wholly inappropriate songs for kids our age. Our parents, then young moms and dads themselves, were playing out the anguish of their lives through their music.  In a lot of ways, John’s parents and mine were walking country music ballads back then, trying the best they could, by God’s grace, to love their kids through the beauty and tragedy of some really hard things. And, each of the notes of those really hard things were played on their kids’ hearts.

And, yet, God, in His loving, tender mercy, gave John and me that neighborhood. Those kids. That opportunity to run, and play, and laugh, and pretend, and imagine we were some other people in some other place, living out some fantastic other reality that didn’t lead us to escape the one we lived, but to somehow, in our little kid brains, give our lives meaning, and purpose, to create a context for compassion, and goodness, and love.  It hit me the other day that because He loved me, God gave me that neighborhood and those kids as a buffer: to protect, nurture, and sustain me in ways I’m just now beginning to understand and appreciate.

We’ve been through some hard things over the past couple of years. Social media and digital technology takes its toll on kids. COVID-19, and quarantine, and the social and political divisiveness we’ve walked through together have created these tough times. As parents who love our children, and who are trying to carve a life of meaning and grace for them, rooted in God’s truth, it’s easy to worry if all this stuff will just be too much for them, overwhelming their abilities to cope, and that they’ll grow up jaded, hurt, resentful people. I worry about that sometimes with my own kids, as well.

And, then God reminds me of my neighborhood, and the many counselors, and teachers, and pastors, and adults who have spoken truth into my life along the way, and all the ways that, as I was walking through really hard times, God was showering grace upon grace onto my head and my heart, as an act of His love for me, all to the praise of His glorious grace. He’s doing that still, every day, right now, in the life of my own children. Just like my mom and dad, I’m doing the best I can for them, but I fail again and again. But, God. Pouring goodness and mercy on them in ways I can’t even begin to understand, ways I may not see until my own kids are 50, ways I may never see.   All because, in all reality, He’s my very best friend.