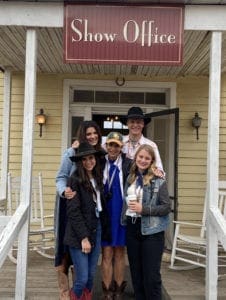 I once heard a man say that he had been married to several different women, and they were all the same person. I know what he means.

When I first married Ashley, she made it clear she had no real interest in a big career. She wanted to be a mom and a wife–these were her aspirations, and they were great ones. When we were newlyweds, she had a couple of small, administrative-type jobs, which she promptly gave up as soon as we had Emma, our oldest. At that point, I think entering the workforce ever again was the farthest thing on her mind.  Isn’t it funny how God completely turns one’s life upside down, yet somehow blesses it beyond all imagination, all at the same time?

When I was a lawyer, I never expected I’d end up at Grace, first as a development director, then a young head of school. Money was tight when we first started here, so when the opportunity presented itself for Ashley to enter into a family business, it seemed a fairly innocuous way for her to earn a little extra supplemental income for our little crew. Marburger Farm Antique Show would operate in Round Top, Texas twice a year. The plan was that my brother-in-law would completely run the show, and Ashley was going to work very part-time, maybe ten hours a week, keeping the books. This was completely doable for a mom of young kids (by this time we had two more, and our youngest was a kindergartner). In 2007, we set out on this journey.

Two years later, my brother-in-law announced he was leaving the family business, to flip houses in Houston. I had a job, one to which God clearly called, and one He was not telling me to leave. So, Ashley inherited the operation of Marburger Farm, this now-giant thing, and ten hours a week became a full-time job plus. Adding a couple of lifesaving friends to the mix filled out her team and allowed us to make it happen, but life changed dramatically. This woman I married, content to be a homemaker, was now an only-partially willing businesswoman and mom of still-small kids.

As I look back on it now, I still don’t know how she did it.  I know many of you moms feel the same way; running a business or holding down a full-time job, all while raising a family. From doing life alongside her these 14 years, raising our children together, I know how many times she felt the infamous “Mom guilt”- two weeks out of town in Round Top each fall or spring, missing various events; late nights in our home office throughout the year catching up on work because she helped a kid with homework, or drove someone to a game or to practice, or taking care of a sick one; nights when we all chipped in, tearing admission bracelets for the show, or hauling boxes, or counting t-shirts, or just loving Mom through all her challenges as she loved us through ours. At times she felt inadequate, overwhelmed, and ineffective as a mom. Yet, she stayed in God’s Word and prayed every morning for grace, and God gave it abundantly.

Proverbs 31 describes the excellent wife, the woman of deep character and grace. This isn’t a woman of leisure. This woman loves and cares for family well, works hard, pours into her community, and engages in the marketplace. “She looks well to the ways of her household and does not eat the bread of idleness.”  I’m sure the Proverbs 31 woman felt like a failure at times, too, like she couldn’t possibly accomplish all she had before her. But, she is faithful, and fears the Lord, and He blesses her and gives her grace.

Two weeks ago, we had either our 26th or 27th show, 14 years after that first one in 2007.  The night the show ended, I was in Round Top eating dinner with my daughters, now all grown and out of our house. Mom was still at the show office, finishing up some work. As we sat there, I looked at these amazing young women, who love Jesus and their mom, and who had come down to Round Top that week to help her out.  Tearing up bracelets as kindergartners had now become one child selling clothing in the store, another helping Mom merchandise the show, and yet another handling show social media promotion.  And, I was so richly blessed as each of them, one by one, shared about how they admired their mom.

They shared how they learned their work ethic from her. They talked about how hard she worked, and yet she always stopped what she was doing to make time for them. They learned how to be strong women themselves, how to love the Lord and trust in Him and buckle down and get things done, all from watching their mom.  They said they learned how to confidently interact with others in their own marketplaces, all from watching Mom do it in this one. This family business Mom so feared would become the barrier between herself and her girls had instead become the catalyst for teaching them about life and work and love and the grace and love of God in Jesus Christ.  My heart swelled as I listened to them, and Proverbs 31 resonated in my ears: “Her children rise up and call her blessed; her husband also, and he praises her. ‘Many women have done excellently, but you surpass them all.’”

Moms out there in the trenches, take heart: It wasn’t easy getting here, not by a long shot­full of failure and pain and sacrifice and late nights and time apart from each other. My wife has often described raising a pre-teen or teenage daughter as “a constant assault on a mom’s self-esteem.” But that night two weeks ago at dinner–listening to those girls who I now admire so much so speaking with admiration about the woman I love, the one who raised them? It was all worth it. God had turned our world upside down, yet somehow in the process, blessed us beyond all imagination.