You are here: Home / Prayer / Sympathy for the Betrayer 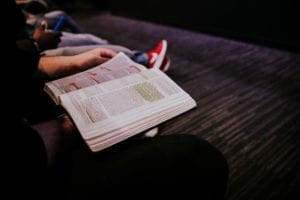 I recently read a book on simplifying one’s life. One of the suggestions the author gave was to greyscale one’s smartphone so the phone has no color. The idea is that brightly-colored apps, photos, and video on our phones are designed to release dopamine in the human brain, as psychological devices to keep us connected to our phones longer.  Adjusting the phone to greyscale (if you can tolerate it) means all these features are no longer in color, but in black-and-white. Hence, no dopamine rush, and less attraction to one’s phone. Less attraction means less time on device, less distraction, and a marginally simpler life. At this point, I’ll try almost anything to make things a little simpler. After six months of greyscale, I think it’s working. I really don’t like looking at my phone anymore, only seeing the world in black and white.

As I was thinking about it the other day, I was more apt to see the world, and read the Bible, in black and white when I was younger.  Life, and life reflected in God’s Word, was about good guys and bad guys, heroes and villains, people to model one’s life after, and people to avoid like the plague (that’s a lot more poignant saying now than it was two years ago, isn’t it?).  Characters like David, Peter, Paul, and Moses were good, while people like Pharoah, Jezebel, Nebuchadnezzar, and Herod were bad. You didn’t want to be like those guys. You wanted to be like the heroes. That was the point of the stories, or so I thought.

And, the guy you most didn’t want to be like, the very worst of the worst (other than Satan, who isn’t, technically speaking, a guy) was Judas. The betrayer. Traitors, those who profess to love you and then stick a knife in your back, are the most reviled among us, and Judas has been regarded as the most despicable of all. To be “a Judas” is to be a betrayer. In Dante’s Inferno, the poet envisions his infamous 9-circled concept of hell. The Ninth Circle, the deepest, lowest circle, is dedicated to treachery, and the fourth and lowest inner circle of that Ninth Circle, the absolute very lowest of the low in hell, is called Judecca, named after Judas. That’s as low as one can get, or at least as of Dante’s day (there have been a few stinkers since then who might be contenders).

Yet, for many of us, including me, grey hair, big mistakes, and resulting self-awareness give birth to deep empathy. God uses these humbling devices to remind us that we are not that great, that nothing in life truly hinges on us, and that we are deeply, profoundly in need of God’s grace. All of us. The older I get, the more sympathetic Judas becomes to me, because I see more of myself in him.

I think, to some extent, Judas saw Jesus as a good man, a friend, maybe even as Messiah, but as an avenue to wealth and power. Judas saw this man as the gateway to greater things for himself, a better life, a pathway to material health and wealth. As the treasurer of the group, Judas probably saw himself as in a position to proper the most, to leverage his position for his benefit.

Yet, Jesus was something completely different than Judas expected. In order to be strong, Jesus said one must be weak. He said a master must become a servant. The first must be the last. These were completely upside-down concepts for Judas, a rejection of everything he thought the Messiah should be. And, disenchantment led to betrayal.

How much different is that from the perspectives of most of us?  Are any of us guilty from time to time of having expectations that aren’t met in Jesus, or of thinking He’s one thing, when He’s clearly another? Have we ever subconsciously tried to manipulate Christ into doing what we want, into giving us our best life now, wealth and health however we define it, all through being “good enough”, or doing enough for others, or practicing some spiritual discipline? Is our ambition to be a first among many, or to be important in Christ’s Kingdom, or important in this one, sometimes more essential to us than loving Christ well or fully?

When Jesus fails to meet these expectations, we have a choice to make: follow or be disobedient to His call, which, in and of itself, is an act of betrayal of the one we’ve called “Lord.” How many times have I not spoken Christ’s name when I had the chance, not taken a stand for what I knew was right or true, neglected a call to pray, or failed to be generous in order to care for someone’s needs? How many times have I been unfaithful, committed small acts of betrayal?

Granted, none of the rest of us ever sold Jesus to the religious leaders for money, but aren’t we just talking about betrayal as a matter of degree? Are my little acts of betrayal any less hurtful to Jesus than Judas’ large one? Judas is a cautionary tale, but the caution is for you and me, and the message is not Judas is bad and we are good, but simply this: There is only one “white hat”, one hero. The rest of us are “black hats,” villains, all in desperate need of the saving grace of Jesus. Yet, no one is beyond the purifying, sanctifying blood of Jesus Christ. No one is beyond the reach of His forgiveness, or His power to heal.

Judas greatest defeat was not betrayal, but despair. Had he stayed alive and hung in there for 48 hours, as Peter (also a betrayer) did, and seen the risen Lord, and been extended and accepted forgiveness, he would have been one of the greatest stories of redemption throughout all time, a testimony for the ages, like Peter and Paul (and me) that Christ can save anyone. The tragedy of Judas is not that he betrayed Jesus, but that he rejected Jesus’ deliverance in His despair.

I want to live my life pressed into Jesus, in deep intimacy with Him, walking with Him by spending time in prayer and in His Word and in fellowship with Him and with other believers. I want to be so close to Him that the Holy Spirit is expansive inside me, right under the surface of my skin so that any wrong I do, any flippant or careless remark, any hurt I cause, any sign of betrayal, immediately pricks my conscience and causes me to fall, once more, into repentance and to once again grab hold of the horns of Christ’s redemption. To never despair, and to always hope.

I wish I could have been with Judas to encourage him to hang on and to repent, rather than despair, that Sunday was coming, and that true hope never dies. But, there are lots of Judases out there who need encouraging. One of them maybe you.