You are here: Home / Christian Education / A Greater Glimpse of Leadership 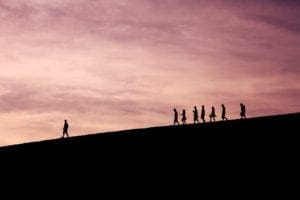 I was reading in the New York Times that there has been a 35 percent drop in coronavirus cases recently in the U.S. The article reports that, in response, leaders in other parts of the country are now setting an “ambitious” goal of getting kids back in in-person schooling “within the next 100 days”- that will actually be May, around the end of the regularly-scheduled school year! I just can’t comprehend this kind of thinking.

Over the past several years, in education, politics, sports, entertainment, and business, we’ve seen lots of notions of what passes for leadership in our world. Overly cautious and fearful on one end, brash and bombastic on the other, mostly self-seeking, manipulative, and using others for its own ends.  And, men (in many cases, deservedly so) catch the brunt of the criticism. In the media, we guys are portrayed either as vile predators, scheming manipulators, or, at best, passive, lovable incompetents, the butt of every joke.  It’s easy to see why so many of us actually aren’t very good leaders. Many of us didn’t have role models at home, and if we were fortunate, perhaps a coach or a teacher showed us a vision of authentic manhood.  It’s no wonder that, as leaders of our schools, our businesses, our homes, and families, we men are truly confused.

Nowhere does this confusion, anxiety, and, in some cases, feelings of futility exist as in the leadership of our home. Most of us start off as genuinely good-hearted guys, wanting to be the kind of husbands and fathers we may not have had, or may have had and, secretly, are worried that we’ll never really be.  But, what does it mean to “love lavishly” as a dad, and as a husband? It’s really tough. I’ll admit I get confused, too. But, there’s a passage of Scripture I go to again and again that gives me comfort that, by God’s power, I can be that guy, the man I want to be. I Peter 5.

I love Peter because he’s like me: well-intentioned but impulsive, outspoken and brash at times, but leading with his foot in his mouth, and not always doing the brave thing. You know, a normal guy. Yet, God amazingly transforms Peter’s life, making him bold and wise. Peter shows there’s hope for me yet.

In talking to elders in the young church, Peter says that, as leaders, we should care for and oversee those God has placed in our care, not acting as a burden, but as a privilege. God adores the woman and children He has placed under your care; they are His children, He created them with care, and He has entrusted you to provide for them, protect them, and intentionally lead them. Intentional leadership, intentional parenting, requires asking ourselves hard questions: What will be the values of your home, the most important things you will stand for? How will your kids be educated, and why? (that’s not a job to be delegated to your wife or your kids; it’s yours. We’re going to be held accountable for it, guys). What will you say “yes” to as a family, and, maybe more importantly, “no”? What will those yeses and noes communicate to your kids about what’s important to you?

As leaders, Peter tells us not only to lead intentionally, but to do so meekly, “not domineering over those in your charge, but being examples to the flock.” At the Sermon on the Mount, Christ said “blessed are the meek, for they shall inherit the earth.” (Matthew 5). Meekness isn’t weakness; it’s defined as power under control.  Power is a gift given by God to promote human flourishing, to use to encourage, equip, and empower others to unlock all the potential that God has woven into them. The reason power has such a bad rap is that leaders routinely corrupt its use, either treating it like a god and worshipping it, or using it to manipulate, victimize, and dehumanize others. You can see husbands and fathers doing that all the time in their homes; maybe you saw it in yours growing up. Meekness, on the other hand, is using the power we’ve been given by God as leaders in the way He intended it:  to prayerfully give our families and those we lead what they need, by God’s grace and through His provision, in order for them to grow into spiritually, emotionally, and intellectually healthy and mature lovers of Jesus themselves. And, as Peter says, that begins with “being examples to the flock:” modeling all those things in how we live, work, speak, and act.

Shepherding our families and others under our care means leading very differently from the world around us, projecting a very different image.  As Peter says, our way is the way of a servant: to serve and to suffer.  This means if anyone in your family goes without, it should be you. When your family or your people hurt, you feel it, too, and you enter into their heart and their hurt instead of avoiding it or completely relinquishing it to your wife. It means going before the Lord and contending with Him in prayer for your wife, your children, and whomever else you lead. And, it means knowing that “your adversary, the devil prowls around like a roaring lion, seeking someone to devour.” We’re called to resist him.  There have been nights when my children were little when I felt an evil presence threatening them, and I had to pray over their beds to chase those spiritual forces away in Jesus’ name.  There are still those days. Leadership is service and suffering. Like a good quarterback, being a good shepherd to your people means being willing to stand in the pocket and take life’s hits for those you love.

Our ability to lead in these ways is supernatural; it defies every selfish bone in our body. We want comfort, we want to be served, we want someone else to take care of us. Being a shepherd is often a thankless job. After all, the shepherd loves his sheep, but nowhere in Scripture does it say the sheep return that love. They need him and appreciate him, but, in all likelihood, no one except your mom and maybe your wife will ever love you as much as you love them, if you love your people well.  Like I said, it requires supernatural selflessness.

The quality that makes it possible to love, suffer, and serve selflessly is humility. Peter says, “be clothed in humility.”  We don’t become humble by declaring ourselves humble, or by willing ourselves to be humble. We develop humility only by obediently serving those around us and by letting life happen to us. We don’t have to seek out suffering, challenges, and other humbling circumstances; they happen to us every day. If you’re like me, you probably had at least five humbling experiences today. The question is whether you’ll balk against these experiences, thinking and feeling that life is unfair, that you’re entitled to better, and you’re getting a raw deal, or whether you’ll let those things mold and shape you into the resilient, wise, forbearing, patient, empowering, humble servant leader God made you to be.

Guys, the main reason why the world around us has such a bad image of male leaders is that they have bad role models. We have a chance to give them a greater glimpse, and to train up another generation of men who will give them that vision. God has shown us the way, and it’s up to us to show them.