You are here: Home / Parenting / One Nation, Under God 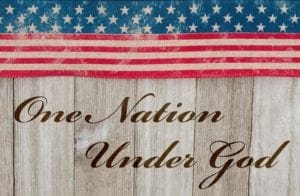 As I write this, I’m watching the U.S. Capitol be stormed for the first time since the British did it during the War of 1812. The British were our enemies, trying to defeat us in a war and destroy our way of life.   I grieve that this may be happening all over again, but, as the saying goes, this time we are our own worst enemies.

If you are a Christian, and a disciple of Jesus Christ, you are called to community. God is a God of community, existing for all eternity as Father, Son, and Holy Spirit, in perfect community, one with another. As God’s children, and His image bearers, we are called to live in community. We are not meant to be alone: we need each other, we are responsible for each other, and God holds us accountable for each other’s well-being.

The predominant virtue of community, the glue that holds it together is love. Paul, giving us the inspired Word of God in I Corinthians 13, guides us in what love is. (Although this passage certainly applies to marital love, Paul gives it in the context of community love, of love within the church). Paul tells us if we don’t have love, we are nothing. Elsewhere, the apostle John tells us if we don’t have love, we can’t really claim to be God’s children. Paul tells us this about love (and, please, think about this in the context of what’s going on around us right now): love is patient and kind; it doesn’t envy or boast; it is not arrogant or rude. It does not insist on its own way; it is not irritable or resentful; it does not rejoice at wrongdoing (and certainly doesn’t DO wrong itself) but love rejoices with the truth. Love is full of hope and perseverance. And, it never ends.

Community is rooted in love. And, because it is rooted in love, it is built around seeking to understand each other. Love doesn’t mean absence of conflict, because conflict always exists in strong community, whether a church, a school, a family, or a nation. But, when conflict exists, those committed to community strive for reconciliation, activating love-  once again, patience, kindness, not insisting on one’s own way, seeking to understand and be understood, not irritable or resentful, and always seeking and rejoicing in the truth, even when the truth causes us to admit we’re wrong. Reconciliation of conflict almost always means we both have to own our responsibility for the conflict, and to forgive and seek forgiveness.

Community may be (as in the Body of Jesus Christ) made up of people who are very different from one another. Yet they are joined together in common purpose, for a common commitment, realizing that the good of the many or the greatest purpose (as, in the case of the church and Christian community, loving and serving Jesus) is more important and larger than any individual, and doesn’t eradicate differences, but transcends them. Communities embrace outsiders, and seek to persuade others to join them. Yet, they don’t force membership, nor do they attack those who are not part of the community for not being a part.

Community doesn’t just happen. Because of our sin nature, it is always in jeopardy. It has to be fought for, contended for, prayed over and advocated for. But, because it is the nature and character of God, and because we are His children and His image-bearers, it is always worth fighting for. That’s one of the ways we advance His Kingdom here on earth.

There is a difference between community and tribalism. Satan, the king of the world always devises a counterfeit to what God has created and calls good. He substitutes lust for love, abusive power for protective power, and tribalism for community. Tribalism is counterfeit community (tribalism is not the same as a tribe, which is a group of people gathered together with common kinship, social, or religious affiliations- any such group can be tribalistic or not). It has some of the characteristics of community, in that it is about people getting together, fulfilling a very human need.

Yet, as author Alan Weiss notes, tribes are homogenous and exclusionary. They see their own members’ similarities and glorify those, and see others at enemies at worst, and as inferior at best. One tribe is, at best, condescending and derogatory about the other tribe; at worst, they are violent. Tribes are typically insecure, mistrustful of others who aren’t like them, and highly threatened by what they perceive as attacks on their beliefs and behaviors. The enemy is not to be persuaded or even co-opted; he must be eliminated.

There’s nothing wrong with politics as a concept, or from a pragmatic standpoint. At its best, politics is simply the process of determining how to use finite resources among competing interests to promote the common good. Our nation, and our government, is built on the political process. But, the common good has always been the unifying factor, meaning, what is best for the community (that’s been debated throughout American history, but that, again, is part of politics). Working together, debating and persuading and deal-making for the common good. This idea is enshrined on our money and elsewhere as E pluribus unum- “Out of the many, one.”  At the end of the day, we are one.

New York Times columnist David Brooks (who is a Christian) notes that we’ve lost common concepts of truth and community as a nation, and so individuals have been pushed deeper and deeper into tribalism. “The deeper the tribalism, and the darker the us v. them becomes, the chances for transformational discussion around disagreements become more few and far between (sic).”

“Once politics becomes your ethnic or moral identity, it becomes impossible to compromise, because compromise becomes dishonor. Once politics becomes your identity, then every electoral contest is a struggle for existential survival, and everything is permitted.”  Like being the first people to break into our own Capitol, a building our relatives have died to protect and promote and defend, for the first time since our enemies the British did in the War of 1812.

Politics isn’t the solution here. It’s Jesus, and truth, and community. We are Christ’s redeemed people, and we are called to be “signposts of righteousness”- to point the way to how things once were (not in 1776, but before the fall of man) and will be again (when Jesus returns).  This means we’re called to point to a better way- to one nation, under God. We’re called to promote community, joined together by love. Love defined as all those things Paul talks about in 1 Corinthians 13. As we live in true community, and invite others into community, and share the love of Jesus Christ that captured the known world and led to notions of truth and justice and limitations on power and working together for the common good, we live out the very virtues that created our nation. Not as some America first, nationalistic strategy, but as the people of God, salt and light in the soil we’ve been planted, the true “city on a hill.”

America is a beautiful idea. The Church of Jesus Christ is a better one. Our hope is not in the citizenship we enjoy as Americans, as great as that is, but in the fact that we are all, together as one, the covenant children of God joined together by the blood of Jesus Christ. We wait anxiously for the day when Christ will return to set all that’s wrong right again, and our anticipation for that “not yet” gives us hope for the “now.” We become a great hope for America when we press into Jesus, live in the light of that coming day, and become what’s best about the community of Christ.