You are here: Home / Parenting / A Better Vision II- Living Within A Secular Age 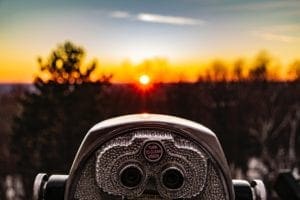 Last week, I wrote about a biblical perspective or worldview, and how, as followers of Jesus, we’re called not only into relationship with Christ, but into transformation, that our very minds would be renewed to think God’s thoughts, and to have his perspective on life. This perspective is not innate; we’re not born with it.  It must be intentionally cultivated.

At one point in Western culture, almost everyone had a Christian perspective, informed by the Bible- including Christians.  But, that’s certainly no longer true. Do you ever wonder why, when you’re sick, or have a friend who’s addicted, you call a doctor to diagnose or a therapist to counsel before calling a pastor to pray? Or, why we think of Nature as inanimate object, rather than as infused with its Creator, pregnant with meaning?  Or, why, unless we really think about it, we default into the proposition that our children’s main purpose is to get a good education, so they can get into a good college, so they can get a solid job, so they can make a lot of money, so they can be happy? The reality is that we live in a secular age, and we (even we who profess Jesus) are actually more secular in our thinking than we know-not our conscious thoughts, or our intentions, but in those presuppositions we subconsciously have about life that act as a kind of operating system, guiding our life and our actions.

There’s a massive, dense book called A Secular Age, written by Canadian professor Charles Taylor. Despite the herculean task of plowing through it,  A Secular Age is a significant work because Taylor breaks down the transition of thought in our broader culture to answer the question how we became secular, or, as he posits: “Why was it virtually impossible not to believe in God in, say, 1500 in our Western society, while in 2000 many find this not only easy, but inescapable?”  I won’t do him justice, but I think providing a ridiculously simplistic version of his argument (which is really all I actually understand!) gives us an idea of how and why we think in such a completely different way from the original readers of Scripture. It also helps us see how, while we cannot and probably should not try to regain that mindset, transforming our minds means finding new ways of looking at our modern lives through an ancient framework.

Before the modern age, in the medieval era and before, there were certain features to the way people looked at life, that made it very difficult not to believe in God. In short, everyone thought:

What Taylor calls “reform movements” (a series of 15th-17th century social movements including the Renaissance and the Reformation) led to changes that began opening the door for unbelief. Philosophies developed, most famously those of Kant and Descartes, saying that meaning, what we make of reality, was imposed by our own minds, rather than embedded in Creation. Meaning was created inside us, we make it, rather than it existing outside us and waiting to be discovered. Because significance was no longer inherent in creation and things, humans were no longer as influenced by the world around them. Rather than being “open” to influence by the world around them, they were “closed” and independent beings. It became possible to think of one’s self as not being affected by blessing or curse, by possession or grace.  As a result, humans didn’t “need” God to protect them from the world around them, or to affect them in any way. It was now cognitively possible to “go it alone,” separated from “enchanted beings” and, therefore, intellectually shielded from them. (By the way, this ability to make our own meaning is why people in our culture are “free” to set their own identity, to say whatever they want about who they are, and others not only accept it, but are willing to call that “freedom” a civil right, regardless of how it may be defined in Scripture. Humans are internally-referenced now, rather than externally-referenced by who their Creator says they are).

When we were a communal whole, rather than a band of loosely-connected individuals, disbelief by an individual had very real consequences. It was a threat to the whole community (think of the Bible and how one person’s sin or unbelief affected or threated everyone). This connection created a deeper community accountability. When meaning became individualized and localized, disbelief had no social consequences, no deeper impact to the community. Therefore, one could split from society and refuse to believe, others cared less about whether one did so, and the glue that held society together as a whole became weaker.

In the 17th and 18th century, the Age of Enlightenment and the Scientific Revolution caused us to think about the universe as a machine, leading to another significant conceptual shift. The way people thought of the universe drifted from the idea of an ordered, hierarchical, cosmos with natural and supernatural realms, all stewarded and shepherded by God, to the idea of a self-ordered universe, governed by natural laws, cold, and anonymous. The universe’s meaning and significance became autonomous, independent, and self-contained, rather than tied to the mind of a transcendent Creator. These ideas gave way to Deism: a passive, rather than active God. To the extent God existed, he was the watchmaker who put it all in motion, then stepped back and let it unwind. Maybe he would judge it all in the end, but he had little to say about the middle of life.

In the 17th and 18th century, the influence of John Locke and Adam Smith brought new ways of thinking about the world.  Before, God’s ultimate plan for mankind could be perceived as something that transcended or went beyond human flourishing; such flourishing was not the ultimate; rather, God was about and working toward other things beyond what was happening here on the earth, what we could see. The outworking of Locke’s Social Contract theory, and Smith’s capitalist ideals in his Wealth of Nations, meant that God’s providence was now seen as primarily about ordering this world for our common benefit, and primarily economic benefit, at that. Through reason, discipline, and hard work, humans could attain these goals. Because it was reason and hard work that served as the gateway to achieving our goals, well within our reckoning, God’s plan for our lives was also something we could “figure out,” “discern,” or “understand.” His plan became more finite, more limited to our current condition, and less transcendent.

During this same time, a final shift occurred, this time political. The ordering of society for mutual benefit, primarily economic benefit, required a sense of morality to keep it from degenerating into complete selfishness, chaos, and, ultimately, failure. The political order developed what Taylor called its own “modern moral order,” by which a deistic god, now untethered to most of the Christian doctrines, set the world in motion, stepped away, and now wanted us to be good, kind, and altruistic, as he made sure we had everything we need. This is the god of “civil religion,” the god of “moralistic therapeutic deism,” which Notre Dame professor and chief researcher of the National Study of Youth and Religion says is the chief religion among American youths today. This was the god of “god and country,” the god that supported the ideals of many (but not all) of the founders of the modern Western democracies.

The practical effect of this quantum shift in Western culture over the course of 500 years is that the default way of thinking, acting, and operating, the water we swim in and the air we breathe, has shifted dramatically without our intentional awareness. We once lived in an enchanted world with spiritual beings who have very real power over humans. We dwelled within a world deeply affected by creation around us, full of meaning given to it by God and affected by and accountable to each other as an interrelated, communal whole. We worked together for human flourishing, but with a deep awareness that God was doing something deeper, even more important, that transcended human flourishing, something mysterious and beyond our reckoning, and that everything we did resonated within that deeper meaning. We, and God, and these supernatural beings, and each in community with the others, all inhabited a universe that interacted and influenced one another, a universe of blessing, and curse, and grace, and spiritual struggle, and it all had meaning and life and identity as God had given it.

We now live in a world where all Westerners, including Christians, function within these parameters as our unspoken “operating system”: We think, therefore we are; We are independent, autonomous beings, free to operate independently and separately from either God or our communities. Creation is Nature, disembodied and without meaning, other than that which we ascribe to it.  Meaning itself is constructed within the human mind and given to things. Instead of an interrelated, organic universe, we live in a self-ordered and self-sustained one, closed and operating within itself. The universe is the box, and what’s inside the box is all there is. Society is a collection of individuals, organized for the common good, and accountable to the extent, and only to the extent, they provide mutual benefit. The purpose of life is to succeed and achieve, usually defined largely in economic terms, and mostly by what happens during our living years as a mortal human being- meaning is likewise defined in these terms.

It’s now quite possible, for many even preferable, to live in a world without God.  And, even if we Christians don’t believe this way, we live much of our lives by default as if we do. As Westerners, we’re amphibians, made for a larger world, thinking and living as if we were only water-dwellers. And, it is not as it was meant to be.