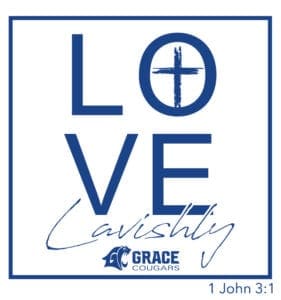 For this is the message you heard from the beginning: We should love one another.  Do not be surprised, my brothers and sisters, if the world hates you.  We know that we have passed from death to life, because we love each other. Anyone who does not love remains in death.

And we ought to lay down our lives for our brothers and sisters.

As we talked about last week, God loves us with perfect love, love that casts out fear. Our response to this perfect love is to, in turn, love our brothers and sisters, and to lay down our lives for them. As love has been lavished on us, we’re called to love lavishly.  It’s not a suggestion or a guideline. It’s a command; in fact, John tells us it’s so central to who we are as Christians that if we don’t love each other, we “remain in death.”  Love is actually evidence of our salvation and relationship with Christ.

For years, when people have come to Grace, they have commented that one hallmark of our school is how we love each other. It’s often communicated in words like “community” or “family,” but the sentiment is clearly love. And, that’s a good thing, because the kind of love that has existed in this community for years is desperately needed in a world of “us v. them-ism.”

There are probably lots of reasons for it–the rise of a post-Christian world, the prevalence of social media and the Internet, an overall lack of civility in culture–but, perhaps at no time while most of us have been alive has there been so much “us v. them-ism.” All people were created to crave identity, to need it, to rest in knowing that, as I said last week, we are our Father’s Beloved in whom He is well pleased. But, we forget that, we allow the world and all its distractions to take us from that fundamental truth. We need identity, though, and so we find it in other things, like a political ideology, or a certain characteristic about ourselves, a region where we were born or live, a correct doctrine or denomination, or a position on certain issues (it’s really evident currently in ideas like how much we fear or don’t fear COVID, how to prevent it or whether to prevent it, what schools, or businesses, or governments, or churches, or our neighbors should be doing in response to it, or how the states up north or out west or down south are handling it poorly or well).

Once I establish my identity, at least partially, in that characteristic or belief, I find others who believe as I do. This gathering of my “amen choir” is rendered significantly easier by social media and the Internet, where people just like me are seeking affirmation in others just like me, seeking reinforcement in our newfound identities. We become “us.” “Them,” of course, is anyone who is not us, and who holds the “other” belief or characteristic or doctrine, or is from the other place.

I begin voicing my opinions, verbally or on social media, often poking gentle fun at the “other,” and I’m rewarded with amens from my choir, by likes and retweets, which, of course, emboldens me further.  My gentle fun becomes edgier and less funny; the rest of the us-es join in. The thems, also emboldened and reinforced by other thems who also fortify their misplaced identity, fight back. Before long, it’s full-fledged tribal warfare. I dare people who don’t like what I have to say to defriend me. I’ve now managed to surrounded myself only with people who are like me, thereby ensuring I have no one who actually cares enough about me to tell me I’ve crossed over the line and become that guy I made fun of six months ago, marginalizing, insulting, and creating enmity with anyone who has the gall to actually have an opinion different than mine, even if it’s someone, like me, someone who Jesus actually bled and died for.

And, “us v. them-ism” may be often be worse among Christians than anyone. How deeply and truly far from the heart of God have I come when I revile those who God loves and love those things God reviles?

For believers, anyway, the root of all this is forgetting the face of our Father, how much we are loved, the precious price for which we were bought. The remedy is repentance, the hungry prodigal turning back to her Father again and again. When the Father’s love for us is our reality and our identity, and the price He paid is made dear, what is important to Him is important to us. He doesn’t really care so much about political ideology, individual characteristics, one region over another, the right denomination, or our position on COVID. What He cares about is people. His people. And, He cares about them deeply. No matter what they believe about all that other stuff. Because “they” are “us,” the only us-es that actually matter–our real family. And, we demonstrate our love for Him through loving our family lavishly.

What is loving lavishly? It’s all those things “us v. them-ism” isn’t, those things Paul celebrates in I Corinthians 13. Love is patient and kind, understanding that others have different life experiences and that God wired them in different ways, and that all these things cause them to think and act and react differently to life around them than is true for us. Love is always rooted in truth, but it allows time and space for others to come around, tries to gently persuade, but realizes that prayer and the Holy Spirit working and active in another’s life is so much more effective and always reflective of God’s will and plan for their lives than our words or persuasive arguments. Patience and kindness are underscored with humility, realizing that truth is defined by God’s Word, not by someone else’s opinion, and, unless it’s rooted in biblical truth, there’s a possibility I might be wrong about whatever it is I’m so passionate about. The older I get, the more I realize how wrong I was about some things I believed, and how others I believed to be such big things really weren’t; not worth the cost of relationships, not worth the expense of love.

When Christ was in the upper room the night before His death, praying for us before He died and returned to Heaven, He asked His Father that we would be unified. The way we love each other would tell the world He was who He said. Loving each other lavishly wasn’t just a hopeful idea or a suggestion. Christ banked His whole testimony, His whole church on it.

Love is the most powerful force in the universe. If you don’t like anything you see in the world around you, God has really given you only two weapons to fight it: prayer and love. Wielded lavishly and well, they’re all we’ve ever needed to conquer the world.