You are here: Home / Christian Education / Free to Serve 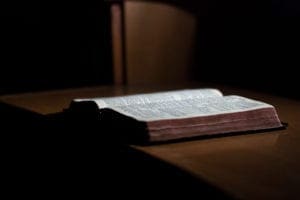 Do you ever feel as though God is trying to tell you something?

When I went to my Bible study this morning, we were studying Paul’s appearance as a prisoner before, Felix, Festus, and Agrippa. Paul did not plan to be a prisoner for two years, yet God used his time in chains to give Paul a platform to preach the gospel to hundreds, maybe thousands, then ultimately to go to Rome and do the same to the Roman emperor (so tradition holds).  As I later had my quiet time, God led me to Jeremiah 26. In this chapter, God called Jeremiah to go to the Temple and preach repentance among the people, so as to avoid judgment and ruin by God for their sins. As you can imagine, the priests weren’t very receptive to Jeremiah’s message, and tried to have him killed.

God then took me to Jesus’ parable of the tenants, reminding me that, like the tenants who killed and humiliated those who came to them in the master’s name, Israel had similarly treated the prophets. Finally, I opened My Utmost for His Highest, where Oswald Chambers writes about being poured out as a “drink offering for others.” (Phil. 2:17).

No real discernment necessary as to what I should write about today.

When we’re saved by Christ’s blood, I would submit we have very little choice in the matter. I mean no disrespect to my brothers and sisters who would argue otherwise, but the Holy Spirit comes upon us so clearly and completely that, one moment, we’re living as abject rebels to God, and we find ourselves His righteous children the next.  To the extent we make the decision at all, we make it as a response to a need that has been made so apparent to us that it isn’t much of a choice, similar to the choice a man who realizes he’s drowning makes to grab the life preserver someone has just thrown him. God calls, we respond, and we are saved.

Becoming God’s servant is different. The difference between being saved “as through the flames,” by the skin of our teeth, and being God’s faithful servant, is a choice. We make the decision to serve Him. And, we make that choice daily; through decisions as minute as how we spend each second and as global as how we spend our lives.

The choice we make, however, is whether or not to serve. Ultimately, the terms of our service belong to God. We don’t get to choose when we serve, who we serve, or how we serve. Once we start dictating these things to God, what we’re doing stops becoming obedient service, and starts becoming willfulness. We stop serving God and start serving ourselves, calling it service to the Lord when it’s actually just attempting to manipulate God by our good acts into giving us the things we want.

The scriptural passages God gave me today all tell stories of people who didn’t write the script on their service. When Paul was imprisoned, the Lord appeared to him and told him he would go to Rome to bring the gospel. It took two more years in prison before Paul even got to Rome, and when he did, it was as a prisoner. Surely, that wasn’t how Paul had it worked out in his mind beforehand. Jeremiah consistently walked into situations like the one above, calling the people to repentance when God warned him that he was going to be beaten and threatened.  If Jeremiah were writing the terms of his service, it would be very, very different.

Yet, God’s obedient service almost always calls for at least our inconvenience, and often our revilement and suffering at the hands of others.  God often calls us to risk our reputation, our livelihoods, even our lives to serve Him by serving others. When others love and praise us for serving them, it’s a nice little transaction: we get good feelings for serving. But, when we serve out of love and are misunderstood, reviled, and criticized in return? That’s when we enter into the service of Christ. Chambers asks, “Are you willing to sacrifice yourself for the work of another believer­–to pour out your life sacrificially for the ministry and faith of others?” What is serving God worth to you? Your pride? Your independence? Certain possessions, or relationships?

The ironic thing is that only as God’s servant can we be truly free. Whatever is not worth releasing for the sake of serving Him–whether it be pride, independence, a certain possession, or a relationship– that thing or person is your god. That thing or person is that which you serve, to which you’ve pledged your loyalty, which holds you captive. You’re not free from God, you’re just enslaved to whatever that is. And, the minute we can honestly come to the place and point in our lives where we can say, “Lord, however this turns out, I’m okay with it, as long as it’s what you want,” or “Lord, I’ll go here or here, or wherever else you tell me to go, and I’m good,” or, “Lord, you can let me keep this thing or this relationship, or you can take it from me, and I won’t love you any less and you’re still good” – on that day, you are His servant, and you are truly free. Free to give, free to love, free to come and go, free to serve.