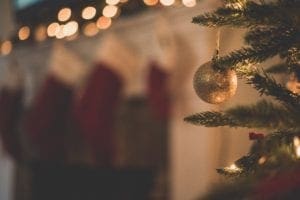 Christmas is a time for getting the whole family together.  For many, that can be both a good and a bad thing. Let’s face it, for many of us, our families are crazy. Some people tell me I have a loud voice. I come by it honestly. My dad’s family are big, boisterous people. At 6’3”, I’m short compared to my uncles.  For years, Christmas was just about each one of us talking louder and louder about whatever we were trying to say, trying to overtalk everyone else in the room. And, my uncles were rough. I distinctly remember one Christmas Day when one of my uncles threw my dad through my newly-married other uncle’s dining room wall. I remember my newlywed aunt crying about how her house was destroyed as my dad climbed out of the wall.  Absolutely insane.

No matter how interesting and colorful family gatherings can get, it would be tough to beat Jesus’ family. In the book of Matthew, the Christmas story begins with the genealogy of Jesus.  I used to skim that genealogy, zipping through the “begats” and all the names that didn’t mean anything to me, on my way to the good story. I’ve come to realize that the genealogy IS the good stuff. In fact, the whole Christmas story, the whole gospel, is summed up in those first 17 verses, providing ultimate encouragement to you and me.

The first thing one notices about that genealogy is that it includes people who weren’t normally included in genealogies in the culture of that day– people like women, who didn’t have a voice in that society, and Gentiles, considered unclean. Yet, Rahab and Ruth, and Tamar are all featured prominently on that list.

And, about Rahab and Tamar: Rahab, you’ll recall was a prostitute. She guided the spies of Israel into Jericho when they arrived, and hid them from her people. Tamar disguised herself as a prostitute in order to get her father-in-law, Judah, to sleep with her so she could produce offspring from their bloodline.

King David is featured in the genealogy, which on its face might seem impressive, and it is, but for all the wrong reasons. David is listed as begetting Solomon by “the wife of Uriah.” Matthew wants to remind you that David had one of his most loyal friends and lieutenants killed, so that he could either (best case) commit adultery or (worst case) rape Uriah’s wife, Bathsheba. From that unholy union, Solomon was borne, also among Jesus’ progeny: Solomon, by the way, polygamist with 1,000 wives. This doesn’t include Abraham, who tried to pimp out his wife, twice, in order to save his own skin, Jacob, who stole his uncle’s sheep and his brother’s birthright, Judah, who tried to have his own brother killed, and some of the worst kings in the history of Israel. So, if you’re keeping score at home, in Jesus’ family, you’ve got prostitution, incest, murder and attempted murder, rape, theft, adultery, and polygamy.  This makes the worst East Texas family look like Leave it to Beaver.

But, that’s not all. After the deportation from Babylon, the list of characters just becomes obscure. Anybody know Eliud? Azor? What did Zadok do? We don’t even know anything about Jacob, father of Joseph, Jesus’ grandfather, for Pete’s sake!

Now, I’m sure, like me, you have some skeletons in your family closet, but no matter how jacked up your family may be, it could not possibly hold a candle to Jesus. And, most of us keep our skeletons safely in the closet; we do not trot them out on our resume for all the world to see. Yet, for the Son of God, they lead off His story: whores, thieves, killers, rapists, adulterers, outsiders, and nobodies, front and center of the gospel.  Why is that?

First, to show us all that no matter who you think you are, or what you think you’ve done, you’re never beyond the blood of Jesus Christ. If God can bring redemption from this motley crew, imagine what He can do through you?  Whether you’re stuck right now in the throes of addiction, of codependence, of depression, of anxiety, or whatever, it doesn’t matter. Even right now, in the midst of those things, being washed clean by Jesus blood is yours for the asking. And, if you’ve been washed clean of that blood, you are clean indeed, no matter what was or what may still be on your resume. The healing, cleansing stain of Christ’s blood is permanent, and never washes away.

This dysfunctional cast of characters that is Jesus bloodline brings hope in another way. For many of us, myself included, our family history is sullied and somewhat sordid. But, just like Jesus’ bloodline, no matter what your family history looked like before, redemption is possible through you. By God’s grace and Jesus’ blood, you can be the turning point, where all of that ends, and where generations of blessing begin. I’ve written here about Orville Rogers, a godly generous man and a hero of mine who gave millions of dollars away and left dozens of children, grandchildren, and great-grandchildren who love and are following Jesus. Orville’s father left him as a child; Orville ended a cycle of dysfunction. My mother-in-law’s father left her family when she was young, too. Through her commitment to Jesus and dogged determination to stay on her knees and walking with him, she has children and grandchildren who love Jesus, too. This can be you and your legacy, too. Stay with it.

Finally, Jesus’ family tree shows us that no matter how much you think you toil in obscurity, in that dead-end job or position of service, where no one sees you and no one cares, the God of the universe sees. And, just as God brought salvation to the world through the likes of Eliud, and Azor, and Jacob, and a scared, unmarried teenaged girl, he can and will bring redemption to the world around you through you, if you’ll stay faithful and holy and true. The whole story of the gospel is God making world-changers through the unnoticed.

For better or worse, our families are often the lens through which we see the best and worst of man, the unconditional love of God, and the beauty from ashes of the gospel.