You are here: Home / Christmas / In Peace 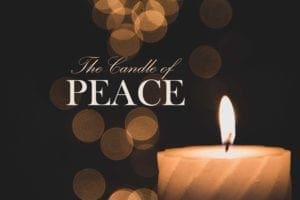 If you were in church this past Sunday, and if your church observes Advent, you know that the candle you all lit this week is known as the Candle of Peace. What immediately springs to mind when I think of peace is absence of conflict, mostly in earthly form: John Lennon singing “Give Peace a Chance” (yeah, I know that dates me, but he was way before my time, too), the clichéd Miss America response to “What is your greatest hope?” “World Peace,” or even just sitting around the dinner table at Christmastime not fighting over politics or whether Jimbo Fisher or Tom Herman is the better coach (answer: neither-it’s Matt Rhule-just kidding).

These concepts of peace, even something so conceptually ambitious as peace among nations, is not what Christmas is about, what Jesus came to achieve.  The poor Jewish baby, born in the dirt in a backwater town at the far edge of the Roman Empire, came to do something so much more cosmically cataclysmic than that.

I’ve mentioned before that in 2019 I read a book called “The Unseen Realm” by Michael Heiser. I highly recommend it, because it opened my eyes to Scripture rife with references to a spiritual realm of a heavenly host, of angels and demons, and of a war across the universe that transcends anything on earth.  Earth is only one battleground, but a battleground it is. The territory is and was the hearts and minds of human beings, the only creation made in God’s image.  Satan and his allies figured if he could turn these beings, destined to rule as kings and queens in a restored earth and heavens, against God, then it would be Satan, and not God, who would rule the heavenly host. That was really Satan’s motive for Adam and Eve and the garden; you were just his pawn to get back at God and rule forever.

For a while, it looked like he had won. And, to the casual observer in many places, it still does. Humans had been turned to him and against God. They had been stolen from God, tricked into rebellion at first, then willfully choosing to be Satan’s slave rather than God’s servant.  The consequences of that choice were devastating. Not only did it result in complete separation from God and being turned over to all the heartache, pain, and emptiness that this life had to offer, but this life became the best than man would get, followed by an eternity of death and torment.

Yet, even in their vanity and blindness, humans still realized there was something really, really wrong. Something, in their cores, they realized had to be made right. They just had no idea what that thing was. And, so, they strived- they worked, and they chased what they thought would make them right–money, and sex, and power, and achievement, and fame, and anything that would tell them that they had value, they mattered, that their purpose was something other than to scrape by on this rock, to suffer, to die, and to become worm bait. But, there was no rest, there was no peace, because deep down in that same core they knew it was never, and would never be good enough.

And, it wasn’t just their souls. Their betrayal was so complete that turmoil and destruction impacted all creation, as well. An earth at peace now saw hurricanes, and disease, and war, and abuse, and neglect, and a dying planet crying out in pain and need.

Into all of this stepped the poor Jewish baby, born in the dirt. Changing everything.

The peace this baby would give would be no kind word, no Christmas greeting, no empty platitude or even words of wisdom, although there would be many. Peace would come at excruciating cost. “Excruciating” means “from the Cross,” and from the Cross, beaten and broken and battered and separated from the relationship that gave him life for the eternity it would take to pay for the sin of all humans for all time, the baby made man would buy peace for all.

He would kill the beast. Like a dragon with its head cut off, thrashing and still causing damage, yet clearly in the throes of death, Satan would begin his long march to destruction. Peace means Satan may tempt and torment still, but you are no longer his pawn. You are the son or daughter of the living God, with the power of the peace of God, and the ability to drive Satan and his demons from your midst in the name of the God-man who you now serve.

Most of all, peace for you means you no longer have to strive and struggle and yearn in a vain attempt to prove to anyone, most importantly yourself, that you’re good enough, that you have purpose and meaning and value and dignity and worth, trying desperately to find all those things in places they were never created to exist. Peace means rest; rest in the knowledge and strength that you are all those things, that you have them all, not because of what you’ve done or what you’ve achieved, but because God became a baby, and the baby became man, and went before you, and gave it all, simply because you are his and he is love.  That’s what it means to rest in peace.