You are here: Home / Prayer / A Cloud of Witnesses (In Memorium) 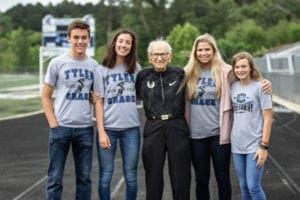 Last week, Orville Rogers passed away. He was 101 years old. Orville was a school grandparent of several alumni: seven of Orville’s grandchildren attended this school. He was a great friend and supporter of Grace- our field is named after him. Orville was one of my heroes, a godly man who lived several different stages of life, all of them extraordinary, all of them as a servant of the Lord, all of them as an act of worship of the God he loved.  He represents the best of what Grace aspires to be, and had the impact we dream of all our kids having.

A couple of years ago, I wrote this blog to commemorate Orville’s world record performance at the USATF Indoor Track Championships. The Apostle Paul encouraged his followers, “be imitators of me, as I am of Christ.” (I Cor. 11).  It’s good to have heroes like Paul and Orville, models of life-giving faith and a life well-lived.  We need more Orvilles. Rest well, brother.

People say all the time there aren’t many heroes left in the world.  I’m not sure about that. I think it really just depends on where you look.  If you’re looking in Washington or Hollywood for your heroes, you may be nearly out of luck. But, if you were looking in Landover, Maryland this past weekend, you might have seen one of mine.

Orville Rogers is 100 years old.  At an age when most people aren’t, well, here, Orville is not just mobile, but making history.  Making history is nothing new for him.  For much of his life, Orville was a pilot. He served in World War II, training bomber pilots. He saw actual combat in the Korean War, flying the B-36 “Peacemaker” bomber on secret runs.  He carried his love for flying into his primary career, serving for 31 years as a pilot for Braniff Airlines.

Serving our country made Orville a hero, but no matter how much he distinguished himself in the air, what really set him apart is his love for the Lord.  It has been the driving motivator of his life. And, so, he took to the air with JARS, a flying mission organization, ferrying supplies and equipment to missionaries in remote locations all over the globe. He and his wife, Esther Beth, raised four kids, two of whom, Rick and Susan, live in Tyler. He taught them to love the Lord, too, and their kids have attended this school.  Orville and Esther Beth have been gracious contributors to this school with their time, talent, and treasure.

That’s a life well-lived, right? A great career, a military hero, a man who loved Jesus and did great mission work for the Lord? If he hung it up there, Orville would be a hero of the faith. But, this guy was just getting started. And, for a man who just turned fifty and is looking at the third quarter of my life, it’s what’s become of the second half of his life that makes him my hero.

When Orville turned 50, he started running. At 56, he ran his first marathon.  About a decade ago, which would have put him around 90 years old, Orville decided to get involved in USATF Indoor Track and Field competitions. Yep. You read that right. At 90 years old.  For the past decade, he has been competing in these events, setting records for his age group.  Last weekend, at 100, he broke 5 world records for his age group at the championships in Landover, Maryland. Dozens of family members were on hand to watch him run, to cheer him on. Remarkable.

Every time he runs, he says he keeps in mind Hebrews 12:1-2: Therefore, since we are surrounded by so great a cloud of witnesses, let us also lay aside every weight, and sin which clings so closely, and let us run with endurance the race that is set before us, keeping our eyes firmly fixed on Jesus, the author and perfecter of our faith, who for the joy that was set before him endured the cross, despising the shame, and is seated at the right hand of the throne of God. Orville is my hero because he has continued to glorify the Lord, serving Him well, even at the ripe old age of 100. He’ll tell you his motivation is the Christ he loves.

As you run your race, living out your life, what motivates you? Do you feel that cloud of witnesses watching you? Are your eyes fixed on them, on something else (like the next step on the career ladder, the perfect kids, husband, wife, body, or life), or are they fixed on Jesus, the only one who can truly form and shape and mold you into all He has created and called you to be?  Instead of running frantically, and looking around, trying to find Him, why not try finding, passionately pursuing, and focusing on Him first? Then, your run, or how you live your life, will be an outpouring of your relationship with Him.  Life is so much more about being than doing. Most of the time we have it exactly backwards.

This time of year we commemorate the death and resurrection of Jesus, who endured the cross “for the joy set before Him.” Do you know what that joy was? It was you. He endured the cross for the joy of being restored to relationship with you.  And, He invites you to come to Him, be with Him, and live with Him. Then, and only then, do we run. And, oh, how we’ll run!

That’s how my friend Orville does it. That’s why he’s my hero.