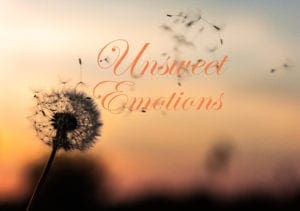 As a man who grew up in a house full of women, all sisters, and who now lives in a house full of women, all daughters, you can imagine that all my life I’ve lived around people who are all very in touch with their emotions.  I still vividly remember the Category 5 emotional hurricanes blowing through my kitchen and living room when my kids all reached adolescence, and all lived in my home.  There is apparently something called the Enneagram personality typing system, and my youngest child (still in my home) is known as a “4”- sensitive, expressive, dramatic, and temperamental.  We have always said she is fully in whatever emotion she is fully in- truly, “all the feels” at the Ferguson household.

Given my vast experience with the full panoply of emotions known to the human condition, I’ve come to appreciate what a gift from the Lord emotions truly are. They are a brilliant way for us to experience the world as God experiences it: through love, anger, joy, lament, and grief. And, yet, emotions are a tricky thing, and can trick you with devastating effect.

For several months I’ve shared some wisdom from a book I’ve read recently, The Coddling of the American Mind. In it, Greg Lukianoff and Jon Haidt share Three Great Untruths, contrary to world religions and wisdom literature, that we’ve with good intentions tended to instill in this generation of American youth, all to their harm. I’ve shared the other two untruths in prior blogs. The second and final one is: always trust your emotions. In some sense, I believe embracing this untruth has led to a lot of depression and anxiety among American kids today.

In some sense we intuitively know we can’t always trust our emotions, don’t we? Have you ever been deathly afraid of something that turned out to be absolutely nothing, so much so that you actually laughed in relief at what previously terrified you? Remember that person you loved so deeply that you were going to spend the rest of your life with him or her? Unless you married your high school sweetheart, do you even know where that person is now? Have you ever been so profoundly angry with someone, only to find out years later that you were completely wrong about the thing you were so angrily about years before?

When relying too much on our emotions becomes dangerous is when we let our emotional state control our reasoning. We feel anxious, or depressed, or angry, or sad, and we let those emotional conditions distort reality for us. We think, “She believes I’m stupid,” when we have no idea what (or if) she thinks about you at all; “None of these people like me,” feeling bad about ourselves and filtering everything around us through that negativity; or, “My parents are to blame for who I am,” focusing on others for our negative feelings.

And, it shows up in our kids when they start interpreting impact as intent. We see this in our culture all the time. Someone says something that might, or might not, be interpreted as offensive.  It hurts our feelings. We bear the impact, the emotional harm, and instead of redirecting it through thinking the best of others until actually having evidence that convinces us they meant harm, we just go ahead and assume they intended to harm us, that they intended to offend. We assume their aggressive intent from the emotional impact it has on us.

The world is full of plenty of things that are said and done that aren’t as we would prefer it, but if we allow our kids to think and feel this way, always interpreting impact as intent, and don’t shepherd and steward them to think otherwise, they will ultimately believe everyone who says anything they find offensive, even mildly so, is aggressive and out to get them. They’ll see themselves as victims, more likely to be angry and feel hopeless, and the world as hostile and against them. If you’re always hopeless, seeing every one else as hostile and against you, and you’re in distress about it, who wouldn’t feel anxious and depressed over time. Does this sound familiar in our culture today?

There’s a better way to think and feel, and to teach our kids to think and feel.  Science calls it cognitive behavioral therapy, but thousands of years before, in Romans 12, Paul encouraged his people to “not be conformed to the world, but be transformed by the renewing of your mind.”  We can shepherd our kids to rewire their minds to think differently about how we feel, largely through charity.  One of the great Christian virtues is charity. The great Christian community is built on charity.  In our dealings with others, charity is manifested in always thinking the best of others until we have a really good reason not to. We often call it giving people the benefit of the doubt, and it’s often in short supply in our culture.  It’s a great virtue to train our kids to practice. When they feel quick offense at something someone said or did, instead of embracing the feeling and stewing on it, labeling the speaker an offender and themselves a victim, why not instead choose a more charitable interpretation of what the other person said or did, one that may have had nothing to do with wrongdoing? Why not think of people as actually for you, or at the very least neutral, until they prove otherwise?

By training our kids to think differently about others, letting their minds redirect their emotions, we can actually help them become more compassionate, empathetic people who not only view the world in more inviting, optimistic terms, but who are better equipped to engage others for the power of the gospel openly and winsomely. We can’t control what happens to us in life, and sometimes we can’t control how we feel about it. But, we absolutely can control how we think about what we feel. And, that can make all the difference in the world between nervous and anxious, or emotionally secure, intelligent, and open to being light-bearers to the world.