You are here: Home / Parenting / The Beauty of the “Both/And” 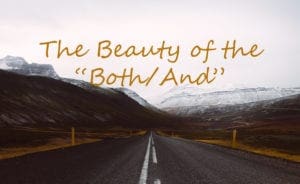 Last week, Amber Guyger, a former Dallas police officer, was convicted of killing an innocent man in his own home when she mistakenly entered it, thinking it was hers.  She received a sentence of five to 99 years, of which she will probably serve ten. The most compelling moment of the trial was a statement by the victim’s brother, Brandt Jean, forgiving Guyger, embracing her, and expressing a desire that she would give her life to Christ.

What followed was a somewhat fascinating division among Christians to the trial and the act of forgiveness. While certainly not across the board, many white Christians marveled and affirmed the power of the gospel to promote such radical forgiveness by Mr. Jean, while many black Christians were frustrated by the racial inequality of the Guyger verdict, that Guyger received a relatively light sentence of ten years for killing Botham Jean. The seeming polarization and frustration of one position toward the other reflects what I think is a sometimes tragic shortcoming in which we view so many things, but particularly matters of faith in our current culture. Unfortunately, it represents a lack of imagination to see the “both/and.”

We live in a very complex culture, one to which I think we often respond with oversimplification, defying nuance and context. Our often excessive exposure to editorialized content in all types of media (whether broadcast or social) on both the right and left politically, and from whatever tribes we find ourselves in on a variety of other issues, has caused us to think in polarized terms. Something is one thing OR another, never in the middle, and never both.

Employing this falsely unequivocal way of thinking renders our leaders either “good” or “bad”, rather than deeply-flawed human beings who we can certainly criticize, all the while acknowledging that some things they do are actually good (or bad, for that matter). Political parties (or, better, certain candidates within those parties) are “good” or “bad”, rather than stronger on some biblical issues and weaker on others. In our distorted estimation, some races, nationalities, or groups categorically do certain things well and others poorly, or have almost always acted either poorly or well in the past, rather than seeing people as individuals with distinct hearts and minds, taking the time to ask why they do what they do, realizing that there are no easy answers, and that all of us, even when we’re operating at our best, operate from mixed motives.

In their book “The Coddling of the American Mind,” Lukianoff and Haidt call this tendency to look at people in overly simplistic terms the Third Great Untruth- life is a battle between good people and evil people. A corollary to that is that it’s the job of the good people is to do battle with and disempower the evil people. When this way of thinking runs wild, it leads to identity politics, assembling the “good” people who are like “us” in the battle for power from the “bad” people like “them”, so we can subject “them” to our will and get our way: which, incidentally, is Nietzsche, not the gospel of Jesus.

The reality is, as Mark Driscoll (himself a very flawed believer who taught me a lot about Jesus) said- there are no white hats and black hats- we are all black hats. There is only one white hat, and He died to save us all. Because we needed it. We would be dead in our evil without it. And, that should make us all very, very humble about our own evil state, but for the blood of Jesus. In Ephesians 6, Paul says, we do not wrestle against flesh and blood, but against the rulers, against the authorities, against the cosmic powers over this present darkness, against the spiritual forces of evil in the heavenly places. We are in a war, but not against people. We are at war against Satan and his failing plan to take the world captive. If people are opposed to us on big issues, they may be children of God who are wrong; they may be children of God who are right, and we are wrong and need to change or revise our thinking; or, they are captives of these dark powers who need our compassion, love, and the persuasive and transforming power of the cross.  And, none of those categories are worthy of hatred or condemnation.

When we remember we are all evil, in the sense of prone to sin but for the blood of Jesus, it allows us all to approach each other a lot more humbly. If I realize that the weight of sin, of living in a broken and fallen world, has clouded my thinking and caused me to see through a mirror dimly, it forces me to look at the way others think more empathetically and charitably.

Humility borne from recognizing my own frailty causes me to tend to embrace the “both/and” of life more often. I can look at something like the Amber Guyger case and recognize that both are true- the fact that Brandt Jean, motivated by his Christian faith and gratitude for God’s grace in his life, forgave Ms. Guyger for taking someone deeply precious to him, was a radically, ridiculously beautiful demonstration of the gospel. And, as beautiful as it was, it doesn’t erase the fact that there is a very real problem in our broken and flawed justice system, whereby minorities receive disproportionately harsher sentences for similar crimes.  Christians can and should both celebrate the grace of Jesus when manifested in our brothers and sisters, and also contend and work for justice for everyone in a system that’s broken and distorted by centuries of hatred and inequality.

Humility borne of recognizing my own flawed nature helps me see that others who don’t think the way I do politically, religiously, or socially are, most often, motivated by the genuine belief they are right, and that their belief is actually promoting some good, which doesn’t make them evil, or any more evil than I am, anyway. It motivates me to try to understand, and to try to persuade, or maybe even modify my own thinking in some way. And, people who feel loved and listened to and understood, rather than yelled at or talked down to, are more likely to listen and seek to understand themselves.

Remembering that I am evil, but for the blood of Jesus, gives the opportunity to love like Brandt Jean, whose act of forgiveness should be celebrated while also authentically lamenting everything about the circumstances surrounding that act. The older I get, the more I realize that life is often much more “both/and” than “either/or.”