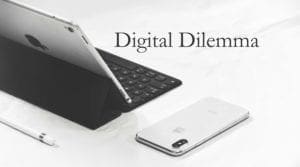 I once heard Christian author Andy Crouch speak at a conference. He made a very interesting observation. He was discussing idols, in both their ancient and modern forms. Crouch noted that an idol works in a very particular way, whether it’s the ancient god Molech, or modern addictions to money, alcohol, power, or work.  At first, the idol delivers on its promise, satisfying you in exchange for a part of your soul. Over time, however, the idol begins requiring more and more of you, and giving less and less in return. At the end, Crouch observed, the idol requires everything from you, and, in return, leaves you nothing. It may ultimately require your children. Crouch wondered aloud whether the promise of digital technology and the power of social media would one day be such an idol for us.

This was 2012, and for some, Crouch’s words have become prophetic. The ubiquity of the smartphone and impact of social media, just beginning to show its full influence back then, is now pervasive in our lives. To be sure, digital technology and social media are a creational good. They have transformed us in amazing ways, allowing us to communicate and conduct business with people all over the world, providing for the transmission of the gospel and a greater breadth of connectedness than ever before. And, yet, like all good things used in a broken and fallen world, these things have their dark side, too. They can be idolized, made ultimate, or at least given way more importance than due. And, they can certainly be damaging to our children.

From 2007 to 2012, the social life of American adolescents changed dramatically. iPhone use became widespread, and social media platforms proliferated. Jean Twenge, a social psychologist at San Diego State University, notes that, since 2011, adolescent depression and anxiety rates have been steadily on the rise, albeit higher in females than males. Twenge believes that the rapid spread of smartphones and social media among adolescents has caused this growth. In a November 2017 article in the American Journal of Pediatrics, Hoge, Bickham, and Cantor noted associations between the use of social networking sites and depression or anxiety symptoms in children and adolescents.

Emotion regulation is a vital skill in childhood and adolescents. It is important that children experience and learn to cope with strong emotions, in order to learn to moderate and regulate them in mature, appropriate ways. Hoge, Bickham, and Cantor observed that overuse of smartphones and social media undermines the development of emotion regulation, leaving kids unable to modulate and appropriately handle their emotions. While using social media and digital technology to supplement face-to-face interaction with family and peers can heighten relationships, adolescents who replace in-person exchanges with virtual ones intensify their social impairments.  Kids dealing with anxiety and depression linked to smartphone and social media overuse can attempt to escape their mental distress by distracting themselves with additional use, thereby heightening the problem.

And, we all know why, right? Kids do dumb things or have bad days, which kids have done for generations, and instead of those dumb things or bad days being in the past, they’ve now been videoed or are being talked about on various social media platforms. Studies show humans are more sensitive to negative comments than positive comments, and the grumpiest or meanest people you know are often the most likely to post social media comments, so those are the comments that stick with kids. Or, children watch as other people curate their photos or comments so that they only see others’ highlight reels, their best versions of themselves, which, in turn, causes kids to compare their lives to the unrealistic, untrue representations of others and find themselves coming up short. They see some party or some event posted online to which they weren’t invited, because it’s an inevitable fact of life that not everyone gets invited to everything, but whereas in the past one would be blissfully unaware they had been left out, now everyone knows it.  What teenager wouldn’t be anxious and depressed if they didn’t take a parent-prescribed breather from all that every now and then?

I’m not the guy who says take all screens away from kids until they’re 21. They are a part of our lives, and they are not evil. That said, there are some things (given what we know from the literature now) that I think are good practices for parenting kids through the use of digital technology and social media.  First (and somewhat contrary to what I just said) from what I can see it is a bad practice to give a child a smartphone or access to social media before they reach middle school. There may be some extremely rare circumstances where it serves a valuable or good purpose for them to have these things; I’ve just never seen such circumstances in the time I’ve been a head of school. No matter how you limit or moderate access to the technology, kids younger than middle school aged are not developmentally ready to own it.  There are options, like the old burner phones, if one’s child really needs to have a phone at that age.  This is an area where parents in our school or other communities can band together and decide as a group not to participate in the peer pressure of digital ownership.

For middle school students, parents might consider giving kids access to smartphones and social media only when they feel as though their child (not someone else’s) is ready for it. Again, working together in community with other parents can help moderate and avoid premature exposure to these technologies. Whether middle schoolers or high schoolers, we should give our kids ample opportunities to practice face- to-face interaction, like playing with friends and getting out of the house

Placing limits on kids’ online communication time is another good practice. Fasting is a spiritual discipline, and at times its good to help kids practice fasting from smartphones and social media: maybe at mealtimes, or when families or friends are together and engaged in activities. According to researchers, five activities for kids have inverse relationships with depression (meaning the more kids do them, the less likely they are to suffer depression): sports and other exercise, attending church and other Christian activities, reading books and other print media, person-to-person engagement, and doing homework. Encouraging our kids to engage in these activities, at the expense of screen time, can actually reduce the instances of mental distress.

These articles and studies teach us something we already know: whether it’s television, candy and cake, smartphones, or social media, too much of a good thing is harmful for kids. And, God gave us our kids to love well, give healthy limits, and act as a hedge against idols in their lives.