You are here: Home / Christian Education / Gratefulness through Unity 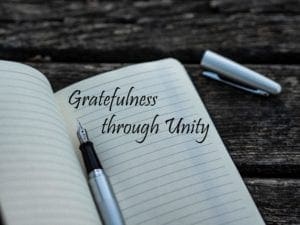 Do you almost always order the same thing on the menu every time you go to a given restaurant?

Or, when you attend a weekly meeting, do you always sit in the same spot? What about people? Do you tend to hang out with or be attracted to people who look like you, think like you, fit roughly your same demographic?

Although some of us like to pass ourselves off as adventurous, for the most part, we’re creatures of sameness and homogeneity. Some of that is probably good; there is comfort in routines. Where it gets problematic and dangerous is when it comes to people. Problematic, because sameness is not at all what we’re called as Christians to model. Dangerous, because radical sameness leads to insular, identity-based thinking, in which “we” (whoever “we” are) are the good guys, and “they” (whoever “they” are) are evil. I’ll talk more about that in later blogs.

We are actually called to unity, to express our gratefulness for all that God has given by becoming one with the Other (anyone not like us, and especially those within the family of Christ).  When Jesus is praying for His disciples and for us in the upper room just before His death, He asks God, The glory that you have given me I have given to them, that they may be one even as we are one, I in them and you in me, that they may become perfectly one, so that the world may know that you sent me and loved them even as you loved me. Somehow, God has worked it out so that one of the primary ways nonbelievers will know Jesus is God’s Son, who He says He is, is how we love those within the body of Christ, manifested in being unified.

Further, 2 Corinthian 5 says we’ve been given the ministry of reconciliation. When God created the world and man, He created us to be in perfect relationship with Him, with each other, with ourselves, and with all of creation. Once sin entered the world, all that became broken and distorted. So, as our gospel tells us, we became enemies with God and in need of restoration and redemption; our sense of identity was skewed and broken, making things like addiction, depression, and idolatry in all its forms possible; instead of stewarding the earth and its creatures, we abuse all of it (true environmentalism, not its weird, radical cousin, is a biblical concept).  And, where God created differences among us to be something good, to bring interest and variety and beauty as we live together in unity, our broken, distorted selves have made these differences bones of contention, rallying points for tribalism, platforms of identity that we use to launch attacks on others, in order to make ourselves feel better about who we are, or who we think we are.

It’s a big mess. But, being ministers of reconciliation means striving for unity in the midst of difference; not pretending it doesn’t exist, but actually celebrating, appreciating, and respecting it, all the while understanding that the unity we have under the blood of Christ is the most important relationship of all. In our broken world, this means listening more than talking, trying to understand, being slow to take offense (which is very counter-cultural in a society that is a belligerent drunk, looking for a reason to take umbrage and pick a fight), and remembering that, as a believer, the gospel (not various denominational doctrines, but true, biblical gospel orthodoxy) is really the only hill worth dying on.

This is not John Lennon, playing the guitar cross-legged at a “love in,” Yoko Ono at his side (Millennials, you can ask me about this later, I love you screen babies!). This is the gospel of Jesus Christ and a command of our Lord and the way we express gratefulness for an eternity of suffering on the cross for your sin and mine. He died for our racism, our classism, our politicism, our denominationalism- whatever particular “differencism” of which we may have been or may still be guilty- Let’s do the hard work of listening, loving others, being one, and acting like those who are dead to those things. Because we are.