You are here: Home / Uncategorized / Charge to Seniors at Graduation 2019 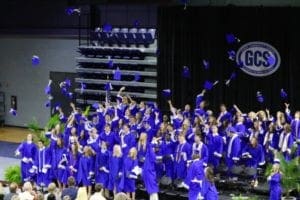 It will be amazing to you and to your parents how quickly four years of college will come and go. As we speak, my daughter Emma is graduating from Baylor. It’s incredible how fast that time went. College is important, but it’s not what’s most important. I want to share a story with you about what is:

Once upon a time, there was an all-powerful and good king. He had lost his children to rebelliousness and selfishness, but had been reunited with them, through a great cost unselfishly paid by their older, beloved brother, the crown prince. The king’s children were now living in foreign lands, loved by the king but still physically separated from them.  Lesser demon kings ruled these foreign lands in which the good king’s children lived. The good, all-powerful king knew he would one day depose all the demon-kings from their thrones, destroying them for good, and bring peace and order and goodness to the entire world. His plan was to put all his children in place to rule over the lands instead of the demons, where they would rule as his faithful children forever.

And, yet, the king knew they were not yet ready to rule. They were not yet strong enough; they were not wise; they were not resilient; they did not have the character they would need in order to be the someday-good and faithful co-rulers of their father the king. And, so, the good king, loving his children and wanting to prepare them for the greatness that was to come, and the better world that would result from their reign, would walk alongside them as they endured various trials and struggles: the Sea of Pain; the Desert of Unrequited Love; the Cauldron of Illness, the Forge of Heartache and Rejection; the Frozen Tundra of Despair; and, the Summit of Striving Against Great Odds.  Nothing about watching his children endure such turmoil brought pleasure to their father the king. In fact, it brought him deep, profound grief to watch it unfold in those he dearly loved. Yet, he knew in the cold, desolate foreign land to which they had been exiled, there was simply no other way to forge the great and noble character of mighty princes and princesses of an all-powerful kingdom.  And, so, the king allowed it to happen.

But, because the king loved his children, his sons and daughters, he would not let them face the trials and challenges and struggles of this lost and broken world empty-handed.  No, because they were his beloved, the king would give them everything they needed in the here and now to face the trials ahead.  He gave them guides and counselors, coaches, and friends, parents in the land of their exile, those who walked alongside them, loved them deeply, and, though never as perfectly as the king could have done, pointed them toward the king and his ways. Their parents guided them through the minor trials of their childhood, the small hurts and bruises, preparing and equipping them for the day when they would go out on their own, into the land of their exile.

Their father the good king also gave them other teachers, people who loved the king and who loved them, too. These people taught them to look at the world around them, not through the eyes of the demon kings and their distorted, broken ways, ways the rest of world had been misled to see, but rather as the world was really meant to be, the way their all-powerful, good father-king created it, and the way he would restore it again for them to watch over and rule. These people taught the sons and daughters the purpose of their lives in the land of their exile was not only to prepare them to rule in the new, restored world of their father-king, but to point others to the way it would one day be. They were to show the world of the demon-kings, a world would sometimes hate them, never understand them, but which desperately needed them, a glimpse of this new and better world. These people taught them that the purpose of life was to reach into this dying and broken world, and to use the powers they had been given, the power to love and to persevere, to share and to passionately care, in order to help lead others into the arms of their older brother the crown prince, so that they, too could be sons and daughters of the king, princes and princesses of the new and better world.

And, so, as these sons and daughters of the king left the beloved homes of their fleshly parents, and the thoughtful care of their teachers, and faced the land of their exile on their own, they reflected upon the great reality of their being: they were never truly on their own. You see, they had been given everything they needed to face the land of their exile, to flourish in it, and to drive back the demon-kings, stealing back others for the light. They had power given them by their father-king and their older brother: power to see the world as it truly was, and to continue seeing that true world, as long as they stayed connected to the Father as they had been taught.  They had been given great power, but power that came only in number: as sons and daughters they had been given one for another, to love and serve and live in community with each other, and they learned they must always find each other in whatever new land they found themselves, to always bind up and live together with others like them, because separately they would fall, but together they would not only survive the onslaught of the demon-kings, but drive them back, vanquishing them altogether.

If they would remember the face of their father and the lessons of their youth, the sons and daughters would flourish. After all, what are demons in the face of children of the king, princes and princesses of the light, invincible and immortal, once they never forget who and whose they are?

Never forget who you are; never forget whose you are; remember you have been given all you need by those who love you, power beyond imagining, rooted in your Father as you press into Him; Become all He has called you to be, striving and persevering; and, find your people, those who are also His children, and do life together with them.