You are here: Home / Parenting / More Than Conquerors 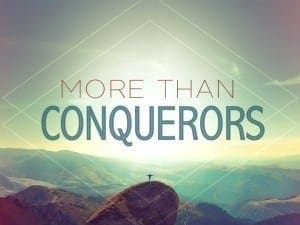 One of the things I really love about Scripture is how, even though you read something over and over, there’s a nuance, an observation, something new that changes everything for you.

I had one of these moments the other day, as I was reading a great book by Michael Heiser called “The Unseen Realm.” In the book, he talks about the famous showdown in the wilderness at the beginning of Jesus’ ministry between Jesus and Satan. Jesus spends 40 days in the wilderness, fasting and praying, preparing for his public ministry. Satan shows up and tempts Jesus three times. In the third of these temptations, Satan takes Jesus to a high place, showing Him all the kingdoms of the world. Satan has been given dominion over these kingdoms by God, and he will give them all to Jesus…for a price. This offer represents a shortcut to accomplish the purpose to which Jesus has been called, and all he has to do is simply acknowledge that Satan has the power and authority to grant these kingdoms to Jesus. Simply recognize that Jesus required Satan’s permission to acquire the nations turned over to him through man’s sin.  That’s it. Instead, Jesus tells Satan to be gone, that Jesus serves the Lord and His plan, rather than Satan’s whims. Jesus doesn’t reveal God’s plan to the devil. Satan, who is not omniscient, doesn’t know the plan.

Heiser notes that, immediately after that encounter, Jesus calls His disciples and casts out a demon. Amazingly, this was the first time Scripture ever records demons being cast out from people. From that point forward, Jesus begins taking us back, freeing His Kingdom from the clutches of hell. His death on the cross, the final payment for our sin, was the unforeseen, unexpected blow that has led, and will lead to Satan’s ultimate defeat. Jesus’ death and resurrection also made it possible for us, his children, to be empowered by the Holy Spirit. Jesus said, “I saw Satan fall like lightning from heaven. I have given you authority to trample on snakes and scorpions and to overcome all the power of the enemy; nothing will harm you.” (Luke 10) At Caesarea Philippi, Jesus tells His disciples that He will build His Church, “and the gates of hell will not prevail against it.” (Matt. 16). Jesus not only has the power to cast out demons and to wage an assault on the gates of hell, but He gives us that same power, with that same mission.

If you’re like me, life is good and joyful and sometimes really fun, but much of the time it’s painful and difficult, with lots of striving. It seems like I’m always facing resistance, that nothing is ever easy. It seems that life is full of pain and turmoil, and when I’m not grieving my own difficulties, I’m empathetically mourning someone else’s. Often, I feel like I’m pushing a boulder up a hill.

But, that’s the way battle works. That’s what spiritual warfare is all about.  Life is often a hard slog, dodging bullets, taking fire, figuratively speaking. Satan and his minions aren’t going down without a fight. But, make no mistake: they are going down. And, God has used and is using His Church throughout the ages to take him down, to drive back evil and the effects of the fall wherever it is. Every time we pray for someone, or alleviate their suffering, or introduce them for Jesus, or tell our kids how God came through for us in our past, or work to make things better, whatever that looks like, we are launching ourselves at the gates of hell. And, the gates are cracking at the hinges.

We can’t avoid hardship and difficulty, and we shouldn’t try. We shouldn’t try to avoid it ourselves, and we shouldn’t rescue our kids from it.  The challenges we face, the striving and the difficulties, are the very things God uses to mold us and make us stronger, more able to launch still more assaults against Satan and hell. We do ourselves and our children a huge disservice when we steer them and ourselves away from the fire. We’re designed to run into the fire, because into the fire is the very thing that makes us stronger, more equipped to face life, to conquer evil and Satan, and to be all God created us to be. God has given us everything we need to not just endure the fire, but to beat it back, to break it, and to emerge broken and victorious. The power to do all that, the power that strikes fear in the hearts of demons is yours for the asking, the Holy Spirit in you.

Scripture tells us that we, and our kids, are made to be more than conquerors.  That is the promise of the cross, sealed by the empty tomb.