You are here: Home / The Head & The Heart / Another World 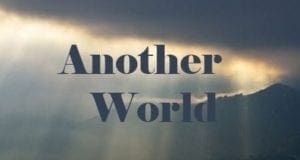 I have a very bright friend who always gives me books: books for Christmas, books for my birthday. Not e-books, paper books. And, they’re always what she calls “lovingly curated,” meaning that she has pre-read them before she gives them to me. Some are fairly dense and difficult to read, but all are very thought-provoking.

I’m reading one she gave me recently that has opened my eyes to Scripture and the world around me in ways that, frankly, I had not really considered before. It also reminds me of how important the ministry of this school is in our children’s lives.

The book is called The Unseen Realm, and in it, Michael Heiser argues that in our modern way of looking at things, we’ve lost a whole perspective on the Bible. The reality of creation is that a whole other realm exists to the one we live in, a realm where spiritual beings live and roam and interact with God and with each other: Yahweh, the God of Israel; members of Yahweh’s heavenly council (Ps. 82:1, 6); corrupt gods and goddesses of other nations (Judg. 11:24; 1 Kings 11:33); demons (Deut. 32:17); and angels and the Angel of Yahweh (Gen 35:7).

Heiser’s work has changed my reading of Scripture, opening it up to amazing things my eyes just glazed over before. This morning, I was reading 1 Samuel 3, where the Lord calls the boy Samuel to be his prophet. If you remember the story, the Lord called Samuel in the night three times. Samuel didn’t recognize the voice as belonging to the Lord, and attributed it to Eli, the priest. After disturbing Eli from his sleep a third time, Eli advises him to respond, “Here I am, Lord.”   The fourth time, however, is completely different, and I missed it before.  Rather than the Lord calling Samuel, the passage says that, “the Lord came and stood, calling “Samuel! Samuel!” (1 Sam. 3:10).

God actually appears before Samuel, in visible form, a form that Samuel recognizes God but yet somehow doesn’t obliterate Samuel the way viewing God is supposed to do to imperfect beings. God talks to this little boy face to face.  And, that’s not an isolated incident, either. Scripture is full of heavenly beings, God and others under his authority, appearing to Abraham, and Isaac, and Jacob, and Moses, and many of the prophets.  The story of God dealing with man is full of these encounters, and when one reads Scripture through these eyes, looking for these appearances instead of glossing over them or avoiding them, it’s game-changing.

Reexamining Scripture with these new eyes reinforced for me that there’s a whole incredible world out there, one that’s completely foreign. My smart friend compared it to what it would have been like trying to imagine life in this outside world when we were still inside our mothers, dark and warm and small. It’s simply beyond our imagining. The amazing thing is that this world, with the heavenly realm and the earthly one coming together, is actually our ultimate destiny. The end of the book of Revelation tells us that, a New Heaven and a New Earth and a New Jerusalem, living together with God and the heavenly host, physical and spiritual realms together.  What’s most incredible is that we have the Spirit of the living God actually living inside of us. Unbelievable.

We have no earthy idea what this otherworldly realm will be like. We can’t; God hasn’t fully revealed it to us. But, we can believe and trust that this life that we’re living now is, as Russell Moore calls it, “the internship for the eschaton”– preparation for that world.  It means that this Sovereign God who loves us, who knows all there is to know about us and all there is to know about this incredible world to come, is busy working in us to get one ready for the other. We can trust in that, even when we can’t see it or understand it. Everything that happens to us in this life is pregnant with transcendent meaning.

That’s why I believe so deeply and profoundly in this school and its work. Because kids don’t need to be prepared only for their present reality; they need to be prepared for eternity. While we can’t prepare them completely for an eternity we don’t understand fully ourselves, we can give them the framework to see life as more than what’s right in front of their eyes, as a spectacular drama played out in multiple realms on many levels, all under the dominion and authority of an awesome God who, through Christ’s blood, loves them intimately as His own, always orchestrating all of it for His glory and our good.

There’s another world coming, one that’s already here. Do we have eyes to see it?