You are here: Home / The Head & The Heart / Changing the World 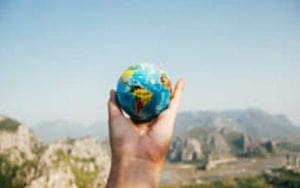 Christians and Christian schools have been in the news a lot lately. I was thinking about our role in this new culture in which we find ourselves, and I’m reminded of a blog I published a few years ago, in another tumultuous week. I hope it encourages you:

There has been a lot of discussion within my circles over the past couple of weeks. The Supreme Court’s recent decision in the Obergefell case, the debate in South Carolina over the use of the Confederate flag, and the overall lack of civility surrounding the debates on these and other issues, sadden and frustrate most people I know.  Our nation seems more polarized. We question the rule of law, the structure of government, the separation of powers. We see the death of Christendom, of Christianity as the dominant worldview in western culture, and we wonder. We wonder whether the Church, the Body of Christ is or can still be relevant.

There are those among western Christians who advocate a Benedictine option, withdrawing from the world as in prior eras of monasticism, retreating from the public forum into communities of prayer and devotion so as to protect the gospel from the encroachment of corrupting cultural influence. This might have been a valid option in the Monastic Age, when the Roman Empire fell and when Western Christianity was the only place it was thriving. But that is not the case today. Christianity is exploding throughout the world in the Global South, and in China and Korea and Indonesia, virtually everywhere BUT Western Europe and North America. As it stands, global Christianity is alive and well, thriving, as a matter of fact.

What about the West? Is the Church relevant? Quite simply, the Church is man’s only hope, and the only reason we can even talk about ideas like the rule of law, the structure of free government, the separation of powers, equal rights and human freedom is because of 2,000 years of Christ’s Church at work revolutionizing the Western world.  In a very real sense, we find ourselves back at the beginning. And, that’s not a cause for mourning, but for rejoicing.

In a very real way, Western Christianity finds itself in its first century context- a minority worldview in a highly pluralistic culture, misunderstood, misrepresented, and maligned. They’ve got us right where we want them, because in that position, the gospel is dangerous– redemptive, radical, world-changing, explosive in its spread of Christ’s love and the human flourishing that comes with it.

While it’s certainly fine to continue to assert our rights as Christians in the halls of government, as we have the ability to do as American citizens, it’s even more important to spend even more of our prayers and energies preparing ourselves to thrive in this new role.  It is here that the world will be changed for Christ’s Kingdom; here is how it always has.

In his book, To Change the World, James Davison Hunter argues that instead of a “culture warrior” motif, Christians should seek to become a “faithful presence within” the communities where they work, live, and play. This is a concept of cultural engagement motivated by a desire to honor God, to live in obedience to Him, and to fulfill God’s commands to love one’s neighbor. By being fully present with Christ in this way, one can be fully present to love, serve, and reach out to those both within and outside the community of faith, fully attentive to one’s tasks and one’s calling as a means of honoring God, and faithful to bring shalom- peace, mercy, and right relationship with God and man- to one’s spheres of influence (Hunter, 2010, p. 228).

Now, more than ever, we must be dedicated to equip our children to live as a faithful presence within their communities. A theology that empowers our school to prepare students to live in a pluralistic age shares much in common with this “faithful presence within” paradigm. This theology realizes that God is more concerned about His reign in the hearts of His people than His place on the throne of American culture. It recognizes, as Hunter says, that American Christians have not fully realized their scriptural role as the Body of Christ in Scripture, not because they don’t love Jesus, but because their perspectives are increasingly influenced by a post-Christian culture, a culture uncommitted, if not opposed, to human flourishing or the life-giving witness of Scripture.

The role of our school, then, is not to equip students to “take back the culture” or restore some Golden Age of Christendom–an age that was itself rife with abuses and mediocre faith, and in need of reform– but, to prepare students to be that faithful presence in the world, to fulfill their calling, within the sovereignty of God, to bring shalom, goodness, beauty, and truth, to life and work and relationships for the welfare of both the brotherhood of Christ and the brotherhood of mankind. This mindset changed a civilization forever, and certainly can again. It’s time to get busy.