You are here: Home / Christmas / A Conversation 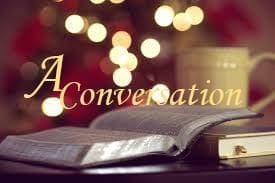 “Michael, the Most High has given me a mission: to appear before a group of men on earth to announce the moment we’ve been long awaiting, the coming of the Savior. It is a wondrous, gracious honor—“

“It is indeed! The culmination and fulfillment of all our work in the affairs of man and creation.“

“Please forgive me, but I have to say, I’ve always been confused about the Most High’s dealings with men throughout their history. His ways are higher than mine, and I know the problem is that my understanding is puny, but I know that your wisdom and insight is greater than mine and I was hoping that perhaps you could help me understand. I mean, I love and I serve, and I don’t need to know everything, but…”

“Ask, Stephen. If I can help you understand what you are meant to, you will better appreciate and enjoy the assignment the Most High gave you, and appreciate Him all the more for giving it to you. What are your questions?”

“Well, first—forgive me, but why do they still exist? I mean, such disobedient creatures! We are always saving them, rescuing them, sometimes from the complete measure of their folly, the full consequences of their waywardness. They are creations of the Almighty, majestic God, as are we. But, whereas we understand the greatness of our Lord, praising Him constantly and completely, they either ignore Him altogether, speak against Him or, perhaps worst of all, praise Him with their lips, while living lives that betray their spoken devotion. Why didn’t He simply wipe the slate clean and start over? Why does He persist in allowing them to continue?”

“Well, the simple reason is that He loves them. They are His. When He created them, He said that creation, above all others was “very good”.  Their pride has blinded them not only to the depths of what they have become, but to the heights of what they once were, and could be again. In their brokenness, they can’t… don’t fully grasp what it means to be made in the image of the Most High. That’s why He wants you to appear to shepherds, their poorest lot. Because only they, in the midst of the hardships and burdens they bear, the full weight of distorted and broken creation resting upon them, have at least some sense of the depths to which they have sunken, of their need. Conversely, the greatest kings and the wealthiest of the wealthy could not begin to understand what they once were.

But you remember, don’t you, Stephen, what glorious creatures they were when they reflected the pure image of the Most High, before they were corrupted by sin? How they walked the earth in the presence of God, walking as His friends and faithful servants? Remembering that, His “very good” creation, helps me understand why He would seek to redeem and restore them, rather than to annihilate.”

“I can see that. But, Michael, in the depths of their disobedience they are so distorted…”

“Yet, even in that distortion they glorify Him. As all of His creation, whether good or evil, must do. For how, in their fractured form, do they better understand the heights of the Father’s love than as contrasted against the abyss of unrighteous hate? When do they more often see the mercy and kindness of God and others than in the wake of the misery of natural and moral evil? How would they know what little peace they realize in their broken world but when the turmoil and chaos subsides? No, until the Most High comes finally and for all, making all things new, even those that set themselves against Him serve as objects of His glory, either of His loving-kindness or His righteous justice.”

“Yet, Michael, to come to them in such humble form! Who can scarcely conceive it! He who spoke creation into existence! Whose eyes shine forth light so bright as to be nearly unbearable, whose mouth is a great and mighty sword, the radiance and beauty, so wonderful and terrible and awesome, all at once! Coming as a human baby? As a child? A man? A hurricane in a thimble! It seems unthinkable!”

“Yet, Stephen, it must be. If our eyes, in their perfection, can be nearly overwhelmed by His radiance, surely corruptible man could not bear it. He must speak in their language, show them His secret beauty on their scale. He is coming to redeem all mankind and creation, to come and die; but although that alone is all sufficient, He is not content to leave it there. He loves them too much even for that. Rather, by showing them the absolute surrender and helplessness of appearing as a baby in a cold, dark, poor finite place, He is revealing to them a whole new way of living, a life of humility and surrender and innocence. Through His corruptible homeliness, He is showing them that which is incorruptibly transcendent.”

“And, Michael…what of the death you speak of? How can God die? Living in the light of the Most High, I would rather be annihilated than to be outside His presence for a moment. What will it be like for the Word, eternally and completely and wholly joined with the Most High for eternity, to be ripped from His Father? It’s inconceivable? Can the created order survive?”

“It will be a terrible day, to be sure. I shudder to think of it, it brings me dread and awe. But, it will also bring the ultimate manifestation of His glory, the ultimate revelation of Truth for all eternity. And, such is the price of love.”

“Thank you, Michael. I have adored and worshiped and extolled the Most High for ages, but this amazing, reckless act of devotion… it is extravagantly loving in a way that even I have never before seen! It is the deepest honor to proclaim His coming to the world.  Glory to God in the highest, and on earth, peace, goodwill towards men!”