You are here: Home / Christmas / The Christ Candle 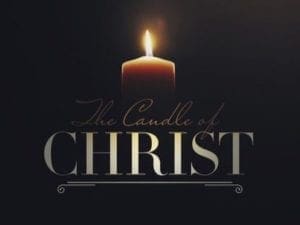 When we think of Advent, or of Christmas, pretty soon our minds start thinking about the crèche, the advent scene.  Mother and father, dressed in pristine, royal robes, beaming proudly down upon the Baby Jesus: cherubic, clean and well- fed, staring up at Heaven and giving that weird two-fingered Trinity salute thing, framed in a halo. Wise men anachronistically bearing gifts, while shepherds, angels, and livestock all stand by, in their pre-assigned and predetermined locations.

Familiarity breeds contempt, but it also breeds complacency. Because, after re-living that first Christmas on our mantels and in our imaginations for so long, we subconsciously turn that spectacular, most cataclysmic moment in human history into a clean, pastoral, sterilized, almost commercial setting. Unfortunately, in so doing, we lose the divine scandal of the Nativity, its shock value.

For the Creator of all things, the One who spoke all of existence into being, the One who sits at the right hand of God Almighty Himself, and who owns all that is in universes known and unknown, to have been born in Caesar’s palace, the most spectacular place imaginable, would have been an unimaginable stoop from the almighty heights of Heaven.

But a stable? Amid animal excrement and stink? To a girl who was nothing, scarcely a child herself?  A scared, unwed kid, one gentle man’s kindness away from execution, herself a scandal? Surrounded by the lowest caste, the ultimate dregs of society? In the absolute worst corner of the Roman world, where no self-respecting official wanted to be transferred, the Scranton office of the empire? It’s really quite incomprehensible to imagine any more lowly beginning, the ancient equivalent of being born to a poor, unwed 13-year old tribal farm girl in southwest Uganda. It just doesn’t compute.

Yet in the cosmic, upside-down, always confounding way of God’s economy, it makes perfect sense. Those in Caesar’s palace have no need.  They have their power, their wealth, and their beauty to keep them warm. Their hearts, along with their bodies, are an Empire away from God at work.  It’s the shipwrecked, as Jose Ortega calls them, the ones at the stable, wallowing in the filth and depravity that is this fallen, tragic world into which the Christ-child makes His curtain call, who get it. They understand that they are lost, their lives are chaotic, torn apart; they are gut-wrenchingly aware of their bankruptcy and need. They are desperately clinging to hope.

And, for them, the shipwrecked, the infant in the stable is their salvation. They grasp for Him, cling to Him passionately, and with reckless abandon. That is why they come miles, worlds away to gain a glimpse, to rejoice. He is their last, best, only hope.

So, what of us? Who are we? Are we in the palace, clinging to our comfort and looking to Christ to bring us “peace on Earth” which, if we’re honest, is nothing more than freedom from our problems and the hope that next year will be better than this one? Or, do we embrace our “shipwrecked-ness,” our poverty in the midst of plenty, and cling to the only One who can give us all we were ever made to need?

As Brennan Manning says, “Christmas means that God has given us nothing less than himself and his name is Jesus Christ. Be unwilling to settle for anything else. Don’t order “just a piece of toast” when Eggs Benedict are on the menu. Don’t come with a thimble when God has nothing less to give you than the ocean of himself. Don’t be contented with a “nice “ Christmas when Jesus says, “It has pleased my Father to give you the Kingdom.”

Keeping Christmas well IS clinging to Jesus. If we do, all our days are Advent. He who testifies to all of these things says, ‘surely I am coming soon.’ Amen. Come, Lord Jesus! (Rev. 22:20). We are anxiously waiting.