You are here: Home / Christmas / Once Upon A Time 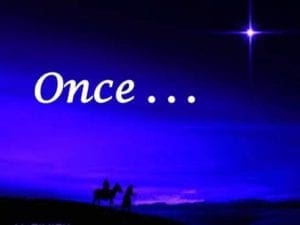 Once upon a time, 2,000 years ago, a royal family was preparing for the birth of a Prince. One who would one day become the King of Kings, Prince of Peace and Wonderful Counselor, and who would save the world from sin. His father, Joseph was a well-known wealthy king and his wife Mary came from a wealthy family. This baby was long awaited. The baby’s name was to be Jesus, and his birth was to be a glorious and well-planned event. Once he arrived, he was wrapped the finest satin and silk and laid in the most ornate, beautiful crib. Jesus lay surrounded by the royal family. Trumpets were heard for miles celebrating the birth of a glorious Savior. The finest gifts and the most grandeur life awaited him.

This story sounds a little off, right? Yes, it sounds like a typical unrealistic fairytale that we can only hope becomes a reality. While we have a sinful and distorted view of “fairytales,” God wrote the most beautiful and true fairytale ever told, and it goes like this…

Once upon a time, 2,000 years ago, God’s people had wandered far away from Him. They worshipped other gods and idols. They were slaves to sin and living lives that were leaving them empty and hopeless. God wanted His people back, and He wanted their hearts. It was time for the ultimate sacrifice. God said it was time to send a Savior, a King of Kings, for all of His people…and that Savior would be named Jesus (Immanuel). So, Jesus was born to unwed parents in the most unfavorable and unattractive setting.

His parents, Mary and Joseph, were traveling to Bethlehem for Joseph to register Mary as his wife during the census. While in route, the time came for her to deliver. Mary gave birth to the babe and named him Jesus. She laid him in a lowly, dirty manger and wrapped him in cloths. Then, an angel of the Lord came to shepherds nearby declaring the birth of the Savior, and they rushed to see the Messiah, the One God promised…the child who would fulfill the prophecy.

I want to take a moment to review the stark differences in the two stories above. Jesus was NOT born into a royal family and was NOT laid in the finest of anything. He was born in what we think was a cave after Mary endured a rough ride on a donkey’s back for hundreds of miles. He was swaddled in pieces of cloth and laid in a dirty feeding trough. How could this baby be the Savior of the World, the King of Kings, the Lord of Lords, the Messiah and be born in this way to unwed parents? Why couldn’t God have chosen an easier life for his Son on earth?

I believe God had to do it this way.

God did not send his Son to save part of the world but the whole world. He came to save both the noticed and unnoticed, the loved and the unloved, the reached and the unreached and this was the only way that could happen. If you know the life of Jesus, you know it was not easy, but you also know He lived a life without sin. Jesus was fully man and was even tempted but never did sin. Because of his lifestyle and upbringing, He knew sadness, rejection, persecution— all which lead to the most brutal death on a cross at the young age of 33. His life was too sweet for earth, but His love was so rich, so unmatchable, that He was willing to leave His throne in Heaven to save His people.

Christmas is a bittersweet season. It’s sweet because we celebrate the birth of Jesus and the birth of new life around us, both physical birth and spiritual birth. However, we also mourn the loss of earthly lives. We cling to memories of those who are no longer with us, and we remain homesick for Heaven. Whether you are experiencing overwhelming joy or grieving over the loss of a loved one, I encourage to seek rest in the Savior who gets you, a Savior who has suffered the worst of life’s woes and still found victory in death. Why? Because He was fully man and fully God, and He left His thrown for you.

The best fairytale ever written begins in a manger and ends on the cross. That’s love, and it’s for us.

Luke 2:14 “Glory to God in the Highest heaven, and on earth peace to those on whom favor rests.”