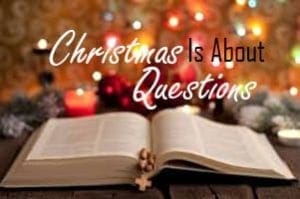 Isn’t this a true statement when it comes to Christmas? I mean, as I was growing up, I remember the Christmas Eve nights – loooong nights as I lay in bed and my mind was racing. What did they get me? What is in that big box? What was in the small box? Will it be fun? Did I get more presents than my brother? But what made it fun was the anticipation of the morning, Christmas morning, the one morning in the year I didn’t mind getting up early. I know I’m probably not alone in those memories.

When you stop and think about the Christmas story, the Incarnation of God Himself, you can’t help but ask questions. Why? When? Where? These and others are simple and the cool thing is, we aren’t the only ones who have asked these type of questions. Let’s take a short trip through this precious story.

Joseph – Can you imagine the inner turmoil he must have faced? Matthew’s gospel points this out in Matthew 1:18-25. It’s a gut-wrenching read when you put yourself in his sandals. He finds out his fiancé (betrothed) is pregnant. Here come the questions. What to do? How did this happen? How could she? It says “…as he considered these things…” Questions the angel shows up and answers. Joseph is tasked with marrying Mary and then naming that baby Jesus. What did he do? “…he did as the angel of the Lord commanded him…”

Wise men (magi) – Think about these guys (I remind you – they were more than likely astrologers). In Matthew 2:1-12, they were minding their own business in the Far East when they see a star. Not just any star, but a star that captures their imagination. The star that points to a king. What’s it all about? They set out to follow this star that remains set in the West for up to two years. When they arrive in Jerusalem, their only thought is this: “Where is He who has been born king of the Jews?” Yes, they followed that star until it rested over Joseph and Mary’s house and they went in, worshipped Him, and gave Him gifts. And yet, as with Joseph, they did what they were commanded to do by God – “warned in a dream not to return to Herod, the departed…by another way.”

The Shepherds –This story in Luke 2:8-20 is so familiar to us, yet it also teaches us. These guys were just minding their business, which happened to be sheep, when their night and their lives were absolutely rocked. It goes from dark to incredibly bright in an instance. The question – whaaaat? – was probably on their mind. An angel shows up and tells them not to be afraid – yeah, right! Then, he gives them instructions about meeting the SAVIOR, who is Christ the LORD, and where they can go to meet Him. So to top that off, the multitude of heavenly hosts show up! What did they do? They did what they were told “…and they went with haste…” There are so many others who were faced with their questions in this story (Zechariah and Elizabeth, Simeon and Ann), confronted with things that they never thought would happen, and yet, they responded the same way – as they were told. But there is one who stands out.

Mary – Can we even imagine how her life was turned upside down? One minute betrothed to be married, the next visited by an angel named Gabriel in Luke 1:26-56. Tasked with hard things, including being told that she would become pregnant, she asked the right question, “How will this be, since I am a virgin?” Gabriel tells her what was to happen and that nothing is impossible with God. How did she respond?  As all the others, “Let it be to me according to your word.”

May the Lord bless you and keep you; may the Lord make His face to shine upon you.