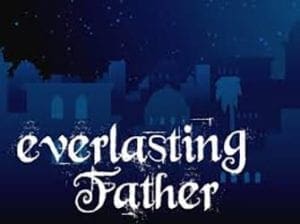 For unto us a child is born, to us a son is given; and the government shall be upon his shoulder, and his name shall be called Wonderful Counselor, Mighty God, Everlasting Father, Prince of Peace. Is. 9:6

The other day, I was working at my desk in the middle of something rather pressing when I received an email from my daughter. She asked me to print an assignment on our printer (the printer at home was broken), and put it in her locker. Immediately, and without thinking, I printed the document, stuck it in a manila folder, and headed up to the high school. On my way, it hit me: I’m the head of our school, a school with an $11 million budget, over 125 employees, nearly 1,000 students, and 650 families. My inbox was full, as was my calendar. And yet, my child asks, and my fatherheart responds.

It’s a fascinating tribute to the awesome incomprehensibility of Christ that He’s referred to in Scripture as “Eternal Father”. He is not God the Father, and yet God and Son are one. Jesus said so. Spurgeon found this equally amazing: “How complex is the person of our Lord Jesus Christ! Almost in the same breath the prophet calls him a “child,” and a “counselor,” a “son,” and “the everlasting Father.” This is no contradiction… but it is a mighty marvel that he who was an infant should at the same time be infinite, he who was the Man of Sorrows should also be God over all, blessed for ever; and that he who is in the Divine Trinity always called the Son, should nevertheless be correctly called ‘the everlasting Father.’”

And, while I don’t pretend to grasp how God and Son can be one and separate, understanding the Son as Everlasting Father helps me comprehend why the Creator of all things would humble Himself to become less than nothing to live with us and die for us.

Maybe it’s because some of us had very stern fathers, or maybe because in the depths of the shame of our sin, we think Christ’s heart is something other than it is. We sometimes picture a cold and distant Father, arms crossed, looking down His prodigious nose at us and saying, “why can’t you get this life thing right? Just stop screwing up! When you can get it together, let me know. Then, we’ll start talking about a parent child relationship.” Even if we wouldn’t say we think this, we act as if we do: hiding our unrighteousness from God, trying to cover it up, thinking if I just check all the boxes I’ll earn Dad’s approval.

This is far from the heart of the Everlasting Father. I remember another day. Emma, my oldest, was five. We were at Disneyworld. A massive crowd, near the entrance to the park and the monorail, thinly controlled pandemonium. One minute she’s standing next to me in her blue dress and red bow. I turn my head, turn back around. She’s gone. It takes approximately .013 milliseconds for it to register what has happened. An icy hand burrows its talons into my chest, my gut a suddenly cavernous pit, my heart rate quadrupling. I am desperate, lost. As I run around, calling her name, my mind races to where and with whom she might be. Lost and scared. Taken by someone else. Calling her daddy’s name, and I’m nowhere near to help her, to save her. What might happen to her? Who’s got her, and what have they done with her? Even as I write this, ten years later, tears come with the memory. No matter how I ultimately die, it will never be worse than that moment.

If, in that instant, you said to me, “I know where your daughter is. I can return her to you. But, it will cost your life,” before those words were out of your mouth, I’d have said, “done”. That’s a sucker bet, an easy bargain.  Just like another Father, an Everlasting One, whose children were taken from Him, this time by a serpent and their own disobedience. That Father knew instantly it would cost Him everything. But, in that garden, in that second, He said to the serpent, “you will bruise him on the heel, but he will crush your head.” Done deal. Sucker bet. Easy bargain.

By God’s grace, my child was quickly returned to me in the park that day. I held her in my arms, weeping tears of joy, whispering in her little ear, “you are mine: Daddy will NEVER let you go. I will always be with you. I will always protect you. You are mine.”

That is a pitiful shadow of the extravagant, overwhelming, nothing-is-too-great-a-price-to-pay love that your Everlasting Father has for you. Love that cost Him everything. And, Christmas was the down payment.