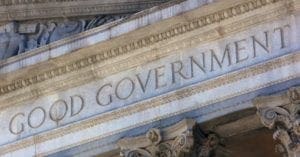 For unto us a child is born, to us a son is given; and the government shall be upon his shoulder, and his name shall be called Wonderful Counselor, Mighty God, Everlasting Father, Prince of Peace. Is. 9:6

Every four years, we celebrate the inauguration of our president. Regardless of how you voted, or where you find yourself in the political spectrum, inaugurations always bring with them a sense of hope, even hope against hope, that this time they’ll all get it right. We hope that this group of leaders will somehow succeed where others have failed, and will make things whole and right.

And yet, in the midst of that hope, we know how it’s going to turn out, don’t we? We know that our politicians, who I optimistically believe are mostly good people with mostly good motives, will make quite a mess of things when all is said and done, and the best that we can really hope for is that it won’t be so mucked up when the next guys come in, when all our hopes will be renewed by the next election cycle.

That hope, that feeling that we have that things are not as they ought to be, for a brighter future, is God-placed. It’s merely the object of that hope that’s screwed up. As N.T. Wright has said, “we place too much trust in our politicians because we place too little trust in God, and in the self-revelation of the living God in the child who is born to us.”

Christmas is both a time of rejoicing, and a time of longing. It’s okay to have a little emptiness, a little sense of wishing things were better, at Christmas. That, too, is God-ordained. In fact, it’s a lot of the very message of Christmas: that hope of a better life, of a better government.

But, the promise of Christmas is so much larger. It’s the promise of a coming Kingdom, of the “now, and not yet”, of a time when Christ will reign in a literal, earthly, geopolitical kingdom that sweeps up all pretenders. Of a King who will forgive the mortal debts that each of us owe, bringing true peace, righteous judgment and justice. This was amazing, blessed news, a cause for rejoicing when Isaiah first brought the message in the wake of Israel’s failed kings, and it’s amazing, blessed news in the continuing wake of ours.

Christmas is a reminder of that brighter future, of that day when the government will be upon His shoulder, of that fearful and awe-inspiring day when every knee will bow and tongue confess that Jesus Christ is Lord.

But, what of now? Do we simply wait and hope? Partially, yes, dear Christian. We’ve already established that waiting is the expectation that God will profitably redeem every second between the now and the not yet, rendering our patient anticipation into faithful alignment with His heart and mind, so that every day is an act of worship of the Giver of all good things. There is great profit in waiting.

But, it is so very much more. You and I together are heralds of that coming Kingdom.  We are being used by God to build beauty and truth in the present that will point toward the greater beauty and truth to come. When the ancient stone carvers crafted statues or columns for Westminster Cathedral, they had no idea of how spectacular, how breathtaking the final product would be. But, they knew that they were creating something small, seemingly insignificant in the larger scheme, but beautiful nonetheless, for the glory of God, a small piece of the greater glory to come. And, it was the combination of all those little pieces of beauty, brought together and given life by the architect, that brought forth the cathedral’s glorious song.

That’s your life, Church. That’s your role. Your life is one small signpost guiding others to the coming Kingdom, showing them the way, anticipating the great government to come. Wright, again: “everything we do in the present in the power of the Spirit and out of love for God and our neighbor will be, eventually, part of God’s new world, even though at the present moment we have no idea how, or what that will look like…we’re called to be agents of new creation, not only its beneficiaries…salvation is God’s gift, not just to the church but through it.”