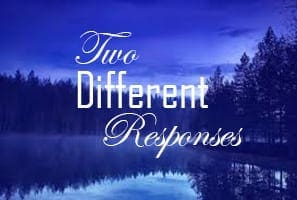 When we look at Luke 1, we see two different people. Zechariah and Mary. Two different visitations. Two very different responses. So much to teach us about responding to God’s Word and His work in our lives.

The first visitation: to an old man in the Holy of Holies. A promise of a son, of the opening of a womb laid barren by a fallen world and the passage of time. We’re not given great insight as to what was happening in Zechariah’s heart, but context and knowledge of our own is instructive. First, Zechariah was offering incense in the Temple, chosen by lot from all the priests in Israel to receive this honor. It would probably have been a once-in-a-lifetime opportunity, the very apex of his priestly career.  Needless to say, he would most likely have been distracted with “getting it right”, with “not messing up”, and perhaps with more than a twinge of pride at being “the Man” for a day, so that the presence and promises of God didn’t really register with him at first.  Perhaps he had even mistaken activity for worship.

Once he realized what the angel was telling him, he launched into argument, explaining to God’s emissary how God couldn’t possibly accomplish His purposes through him.  Life had blinded Zechariah to what was possible, numbing Zechariah to the One who makes all things possible. Zechariah’s heart wasn’t ready for God’s revelation, and God, in His graciousness, gave him a nine-month “time out” to think about it.

Contrast that with the second visitation, to a young girl alone in her house or in a field somewhere. A promise of a Son, of a womb also opened by miracle. This girl was no one, from nowhere, with nothing, a girl you’d pass in Wal-Mart without so much as a second glance, barely registering in your mind as another body in the aisle with you. When Gabriel referred to her as “O favored one”, she was confused—you can almost hear it in her voice- “you must have me mistaken for someone else.” Mary had a clear sense of her own humility, of the state of her heart but for the presence of God.  She was also young and innocent, not just virginal in the sense that she’d not been touched by man, but with a purity, an openness to God’s possibilities, still “foolish” (wise?) enough to believe that God could actually do what He promised, no matter how crazy it sounded. Her response? “Okay; let’s go.”

As Alfred Delp said, “Advent’s holiest consolation is that the angel’s annunciation met with a ready heart. The Word became flesh in a motherly heart far beyond itself into the world of God-humanity.” It was from this humble, broken, ready soul that God brought forth the Salvation of the world, the cataclysmic death of Death, and the ultimate regeneration of creation.

The grace and goodness of God is that He used both the old man and the young girl; God loved them both, had declared them both righteous. The state of their hearts was no match for God. Both were used by Him, and both glorified Him in that use.

But, there’s an “easy” way, and there’s a “hard” way, isn’t there? One was humble before God, so God could use her; the other had to be humbled by God, so that he could be used.

Here’s the question- God will come calling—so, which will you be: the one that “generations (your kids and grandkids) will call blessed”, or the cautionary tale? It’s all in the response.