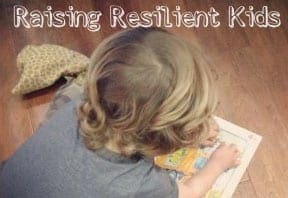 If you read this blog much, you’ll see that one of my big recurring themes (or, as my wife says, one of my “soapboxes”) is building resilient kids that become strong adults. In this culture, where Christianity is becoming increasingly marginalized, furthering God’s Kingdom requires and will require people who aren’t afraid tobe considered quirky at best, a little dangerous at worst. I don’t see a place for wilting flowers in the next generation of believers, and so I’m not a big fan of “bubble-wrapping” kids in this generation of parenthood. Appropriately protecting? Yes. Shepherding through trials? Without question. Manipulating circumstances or others to ensure a pain-free existence or our definitions of success for kids? Absolutely not.

Which is why I was so moved by an op-ed piece I read in The New York Times by David Brooks the other day.  He made the point that growing resilient kids, tough people, isn’t about being callous towards them: walling off emotions or putting on a thick skin. Emotional resilience isn’t hardness. According to Brooks, resilience, toughness, and grit aren’t traits people possess in and of themselves, but are inspired by something deeper than themselves: a dream, a hope, a worldview, or love. Mother Theresa was strong because her faith in God manifested itself in radical love in the direst of circumstances. Martin Luther King endured imprisonment and hate because that same faith gave him a vision of a better world,a world that made his suffering worth it.

Being resilient and gritty is about being equipped to face hardship, being made to walk through the flames instead of around them, all the while being loved and supported. But, it’s not only that. It’s also about believing in something so deeply, loving someone or something so passionately, that you will endure anything for them. Even Nietzsche, who was no friend to faith, understood this when he said, “He who has a why to live for can bear almost any how.”

When you think about it, that’s really the power of Christian education, and this school, particularly. Two of our core values are “life as worship,” and “redemptive community.” What we’re all trying to do, teachers, families, and administrators, is to give kids a deeper “why”: the only “why” that really matters- eternal life in Jesus Christ, and the joy and blessings that come from loving and serving Him, and furthering His Kingdom. Kids, like all of us, learn in context. You can’t just preach to them once a week and think they’ll get it. They have to learn while they’re doing life, day after day, alongside adults and peers who are doing the same thing, working toward the same end. It’s why God tells parents in Israel in Deuteronomy 6 to instruct their kids in the ways of the Lord as they do life together, and why Jesus taught His disciples as they walked on the road and lived and worked together. Kids learn about God while they’re learning about life. If you want to teach them a bigger “why,” that all of life is about worshipping and loving and serving the Lord, the best way is to tie the study of life-school- and worship together. As I’ve noted before,  James K. Smith correctly says that we aren’t primarily thinkers, or feelers. We’re primarily lovers, and we will do what we love. The purpose of our school is to form disciples, lovers and worshippers of Jesus, centered on liturgy and worship. That’s the “why” that drove Mother Theresa, and Martin Luther, and Martin Luther King, and keeps kids following Jesus after they leave for college, taking them through what life has to throw at them.

Finally, Christian education, this school exists in a grace-filled, redemptive community, one that teaches kids to be other-centered, to love each other, and that models that love by how parents love and care for each other, how administrators love teachers, teachers love each other, and how all love the kids. This community teaches and models that love for God sparks a deeper love for one another than could ever be mustered on one’s own. There’s nothing soft about that love; it is fierce, and it absorbs hardship and pain and comes right back again, to love more and stronger and better. That love is the strongest, most resilient force in the universe, and this school, working by God’s grace with churches and homes, is the hotbed where it is grown.

All of us want to grow strong, resilient kids who love the Lord.  In our hearts, I know we want that even more than whatever else we want for them.  Letting life happen to them and walking them through it lovingly and well is a part of the equation. Giving them the “why” and the “for whom” to do it is the other.