You are here: Home / Parenting / Cultivating Gratefulness in Our Kids 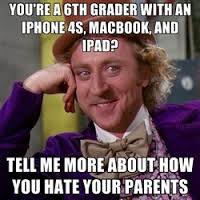 I am a complete, utter Apple sucker.

Three weeks ago, I downloaded the new Apple iOS 7 software on my “ho-hum, run-of-the-mill” iPhone 5 (formerly, my “brand-spanking-new-isn’t-this awesome” iPhone 5 just six months ago).  I knew what was going to happen, saw it as clear as the nose on my face: it was going to slow down my system like Uncle Si with three pounds of fudge in his belly, give my battery a half-life of 23 seconds, and put a severe crimp in my overall communications game.  My foresight was due to no particular prescience on my part, except that earned by painful experience. I had downloaded the formerly latest, “cool new” upgrades on my two prior iPhones, with exactly the same results.

So, why did this particular dog return to yesterday’s expelled lunch? Lack of gratitude. Plain and simple failure to be thankful for what I already have, desiring the better deal. A friend of mine said the other day that she was wondering if lack of gratefulness, rather than pride, was the original sin: that before Satan, and then man, could want to “be like the Most High”, they had to be in a state of ungratefulness for God’s goodness, for what He had given them and their position in His Kingdom.  Those things just weren’t good enough for them. Although I still think it was pride, that taking the focus off of God and placing it on oneself and one’s surroundings caused man and Satan to compare and find their lives somehow wanting, her comment underscores the destructive nature of an ungrateful heart, and, conversely, the joy that comes with viewing all of one’s life and everything one is and has as a gift from God.

All of this is probably why it flies all over me when I see ungratefulness in our own kids’ lives, and in many of the kids I’m surrounded by all day long.  I’ve been thinking about how I can better cultivate gratefulness in my own children, realizing, as I’ve said before, that it all starts with me and my heart.

It seems that Scripture is pretty clear that gratefulness comes with a changed heart, transformed by the Holy Spirit. The most important thing I can do (and not just give lip service to) is to pray. Pray that those who live in my house and who walk the halls of our school would see life as a gift, would shift off of that baseline discontent that we default into so often. But, while it’s mostly Holy Spirit work, I think there are some other things we can do.  I wonder what would happen if every morning before school, or every night at dinner, we would each have to go around the table and name five things, unique to that day, for which we were grateful? What was some truth that God showed us today? What was some encouraging word someone said to us, or that we had a chance to share with someone else? What cool thing did a friend do, receive, or get recognition for that we want to rejoice in? I’ve done that sporadically at dinnertime, but I wonder if we practiced it as a steady, sustained activity over the course of a month or two, what would happen? My hypothesis is that it might transform my family’s whole outlook on life.

One thing that I know really helps is delayed gratification. My kids often think they’re the last human beings on planet Earth to have the absolute essentials in life—you know– cell phones, certain clothes, special foods, things that no reasonable human being could possibly live without. I really have seen that, the longer they have to wait to receive things, the more they appreciate them when they have them. Especially when their friends get them so quickly (so, thanks “immediate gratification” parents—you’re helping me train my kids—just kidding, sort of) I’m not saying that lasts forever, but I think over time and with a variety of things, it does train their hearts to have a general inclination toward gratefulness.

Maybe the most effective thing is to just expose them to the world around them. I’ve never really been the “throw your kid out in the ocean and let him learn to swim” type. Most of the kids I’ve seen who have been parented that way either drowned or survived after unnecessarily taking a lot of salt water into their lungs (which really burns, by the way). But, giving kids opportunities to get outside their normal lives, to talk to people who are engaged in serving people who have nothing, to serve and engage with people who don’t live like they typically live, to do mission work in countries and places where even the American poor would be considered wealthy, all fosters empathy and appreciation.

Gratefulness is a spiritual discipline, like prayer and Bible study. It’s like running; you can’t go around the block a couple of times once a month and call yourself a runner, or really derive any benefit.  It seems that any of these things take doing them over and over again, with consistency and purpose.

What do you think? Do you have any other ideas for cultivating gratefulness, either in ourselves or our kids? If you do, I’d love to hear from you….